Epinephelus itajara is one of the 87 members of the genus Epinephelus, which together with 75 additional genera make up the sea basses family (Serranidae) in which a total of 538 species are currently described. This species is found in the waters of the western Atlantic, from the coasts of Florida to southern Brazil, including the Gulf of Mexico and the entire Caribbean Sea; as well as in the eastern Atlantic, from Senegal to Congo; and in the eastern Pacific Ocean, from the Gulf of California to Peru. It lives on a wide variety of habitats (reefs, mangroves, grasslands, estuaries) and in a range of depths up to 100 meters.

On average, Epinephelus itajara measures 175 cm, although males can reach up to 250 cm maximum total length. With such a size it is not uncommon for them to reach 300-450 kg in weight. The body is very robust, elongated and with a broad rostrum. It has a large terminal mouth with canine teeth, and the dorsal profile of the face is slightly concave. The eyes are relatively small. The preoperculum has finely serrated edges and the operculum has 3 spines. The dorsal fin is formed by 11 spines with indented interspinal membranes, followed by a second region (higher than the spiny region) formed by 14-15 soft rays. The anal fin has 3 spines and 8 soft rays. The pectoral fins have 18-19 rays, and the pelvic fins are smaller than the pectoral fins. The caudal fin is rounded and has 15 branched rays.

The base color of the body of Epinephelus itajara is yellow-brown, gray or greenish. The head, as well as the dorsal part of the body and fins have small black spots, which become smaller with growth. Specimens less than 1 meter in length show 3 or 4 subvertical, faint and irregular dark bars on the posterior part of the body and another bar covering the posterior half of the peduncle. Adult specimens are darker and more uniformly colored than juveniles.

The diet of Epinephelus itajara is based mainly on crustaceans (especially spiny lobsters), as well as turtles, octopuses and fish, including rays and even sharks.

Reproduction of Epinephelus itajara occurs during the summer months, when up to 100 mature individuals congregate in a small area to spawn at a depth of 15 to 30 meters. Young specimens are born female, but after 10 to 12 years of life they change sex, becoming males. 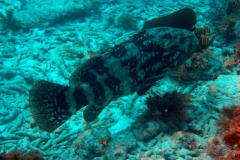