Epinephelus marginatus is a species belonging to the sea basses family (Serranidae) that inhabits rocky bottoms at depths between 10 and 200 meters. It is present in the Mediterranean Sea, as well as in the eastern Atlantic Ocean, from the coasts of the United Kingdom, France, Spain, Portugal, Madeira, Canary Islands, Cape Verde Islands, to the coasts of Angola, São Tomé and Principe. It is also present in the waters of South Africa and entering the Indian Ocean as far south as Madagascar. In the western Atlantic Ocean, it is also present from southern Brazil to the coasts of Argentina.

The body of Epinephelus marginatus is elongated, oval and somehow flattened laterally. It is a species that reaches considerable dimensions and weights, having been recorded specimens up to 120 cm in total length and up to 35 kg in weight. They have a large terminal and extensible mouth, in which the greater length of the lower jaw over the upper jaw stands out. The dorsal fin of this species is unique and continuous, being formed by a spiny region of 11 rays followed by 14-16 soft rays. Of the spiny region of the dorsal fin, the third or fourth spine is usually the highest of all. Between the rays there is an interspinal membrane that is incised between the different spines. Also, despite being a continuous dorsal fin, between the spiny region and the soft rays there is a notch. The anal fin is formed by 3 spines and 8 soft rays. The caudal fin is rounded in shape and has 15 branched rays. The pectoral fins are rounded, relatively short and have between 17 and 19 rays. The pelvic fins originate posterior to the base of the pectoral fins.

Although Epinephelus marginatus is considered a demersal species, it is far from being a sedentary species, and despite living in fixed territories, it has numerous known hiding places where it spends a few days and changes between them. It is an extremely curious species, and does not scare too easily.

The menu that feeds Epinephelus marginatus consists mainly of other smaller fish, as well as cephalopods and crustaceans.

It is a hermaphroditic species with sex change. All individuals are born as females, reaching reproductive maturity at sizes between 44 and 53 cm in length, equivalent to 6-8 years of life. Subsequently, at around 16 years of age or 80 cm in length, females transform into males. The life expectancy of Epinephelus marginatus is estimated to be 35 years. 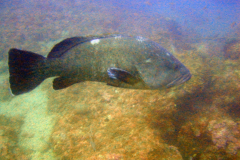 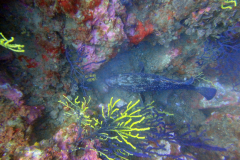 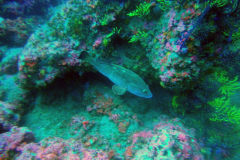 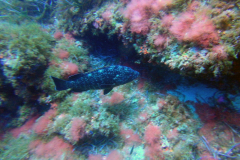 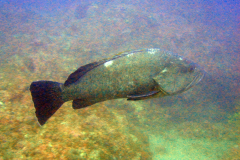