Epinephelus merra is one of the 87 members of the genus Epinephelus, which together with 75 additional genera make up the sea basses family (Serranidae) in which a total of 538 species are currently described. This species is found in coastal waters as well as in the surface waters of offshore reefs, always at depths greater than 20 meters and rarely up to 50 meters. Their distribution covers both the Indian Ocean and the Pacific Ocean, being present from South Africa to the Pitcairn Islands, southern Japan, and Australia. They are not present in the Red Sea, nor in the Persian Gulf, nor the coasts of India and Hawaii.

We are in front of one of the smallest species of the genus Epinephelus, since Epinephelus merra reaches a maximum of 32 cm. The hide is elongated, with a robust rostrum and slightly concave dorsal profile. The preoperculum is rounded in shape, while the upper margin of the operculum is practically horizontal. The mouth is large, with the jaws exceeding the vertical of the eyes. Inside the mouth there are between 2 and 4 rows of teeth, the inner ones being almost twice as big as the outer ones. The dorsal fin is formed by 9 spines (except for the first 2 spines, the rest are more or less the same length) and 15-17 banded rays. The anal fin has 3 spines and 8 soft rays. The caudal fin is rounded.

The head, body and fins of Epinephelus merra are pale in color and covered with dark brown or reddish brown spots, forming between them through the intervening space an irregular pale reticulated pattern. The spots on the ventral part of the body are paler, more spaced and diffuse than the dorsal ones. Occasionally, some mid-body spots join together to form horizontal bands. There may also be 5 irregularly shaped dark bars that are the result of the relative and differential darkening of some body spots. Note that the dark spots on the fins become smaller and smaller as we move to the more distal parts of the fins. As for the pectoral fins, the spots are among the smallest of the whole body. Finally, the interspinous tips of the membranes of the dorsal fins are white or pale yellow, with a small black submarginal spot.

Epinephelus merra is a solitary species that feeds mainly on fish, crabs, shrimps, cephalopods. As they grow, the intake of other fishes is increased with respect to other possible prey.

The genus Epinephelus has the ability to change sex, more specifically they are protogynous hermaphrodites which means that females can become males at some point in their life. This sex change usually occurs in the non-breeding season and can be caused by social stimuli, age, growth and body size. However, the initial trigger for the sex change remains unknown. Epinephelus merra usually spawns during full moons from January to April. 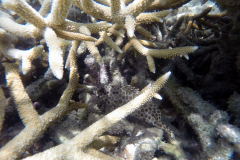 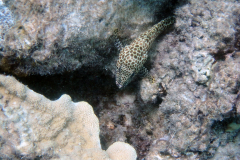