Plectropomus areolatus is one of the 7 members of the genus Plectropomus, which together with 75 additional genera make up the sea basses family (Serranidae) in which a total of 538 species are currently described. This species is found in the lagoons of coral reefs, as well as in the outer reefs at depths of about 20 meters. Its distribution, despite being coastal, is wide, being present in both the Indian and Pacific Oceans.

The head, body and fins of Plectropomus areolatus are greenish-gray to brownish-brown or brownish-red, with numerous round to oval dark-edged blue spots (the largest approximately equal in size to the pupil). Most of the spots are within the diameter of adjacent spots. The pelvic fins have dark brown to blackish membranes, and the posterior margin of the caudal fin has a white border and often a blackish submarginal band.

The main diet of Plectropomus areolatus consists of other fish. 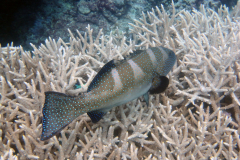 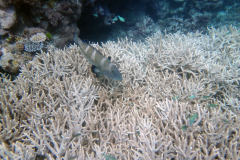