Variola louti is one of the 2 members of the genus Variola, which together with 75 additional genera make up the sea basses family (Serranidae) in which a total of 538 species are currently described. The distribution of this species includes the Indian and Pacific Oceans, from the east coast of Africa and the Red Sea to southern Japan, southern Australia and the Pitcairn Islands. It inhabits crystal clear waters at depths greater than 15 meters and less than 350 meters.

The general color of Variola louti is reddish and covered with blue spots. They have a reddish color on the upper body, which often turns orange to white on the lower body. They are marked with many small bluish or pinkish spots on the head, body and fins. The posterior margins of the fins are yellow. Juveniles appear to mimic fish of the family Mullidae.

Females of Variola louti reach sexual maturity at a standard length of 33 centimeters. Aggregations of numerous individuals have been recorded gathering to spawn off the coast of Sumatra during the breeding season, which occurs between December and February. It is believed that this species is a protogynous hermaphrodite, that is to say all specimens are born as females, and later in life change sex to become males. 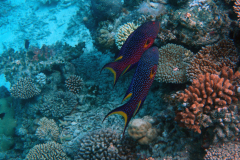 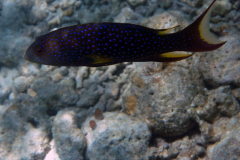 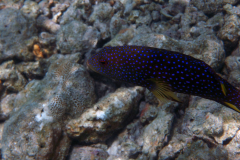 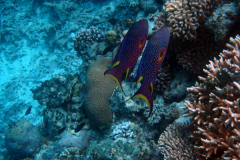