The striped seabream or Lithognathus mormyrus is a species belonging to the sea breams family (Sparidae) found in the waters of the Mediterranean Sea, Red Sea, as well as the eastern Atlantic Ocean, from the Bay of Biscay in the north to the Cape of Good Hope in the south, even reaching the Natal province of South Africa in the Indian Ocean. It is also present in the waters of Madeira, the Canary Islands and Cape Verde Islands. It inhabits sandy, muddy, rocky bottoms and seagrass beds (especially Posidonia oceanica in the Mediterranean Sea) at depths of up to 150 meters.

Lithognathus mormyrus has an oval and laterally compressed body, which usually reaches 30 cm in total length, although there are occasional records of specimens up to 55 cm in length. The snout of this species is elongated and pointed, with a straight head profile. The head has small eyes, as well as a mouth in the lower part of the head, practically horizontal and with thick lips. Its jaws have 8 non-incisiviform anterior teeth, as well as lateral molar teeth. The dorsal fin of Lithognathus mormyrus is unique and consists of 11-12 spines followed by 11-12 soft rays; the anal fin has 3 spines and 10-11 soft rays; and the pectoral fins are short. The color of this species is based on gray with silver reflections, being darker in the dorsal part and lighter in the ventral. It has between 14 and 15 thin vertical bands of brown to grayish color. Additionally, the intra-orvital region as well as the snout is darker brown. The dorsal and caudal fins are generally dark, with the rest of the fins lighter in color and with yellowish or pinkish tones.

It is not uncommon to find specimens of Lithognathus mormyrus in brackish waters, as they tolerate salinity changes well. Gregarious in nature, it is also common for considerable schools of specimens of this species to form.

The feeding is carnivorous in nature, counting among its prey annelids, molluscs and small benthic crustaceans. 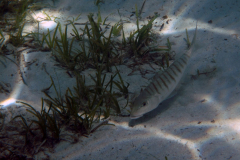 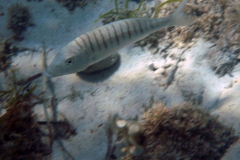