Pagrus pagrus is a perciform belonging to the sea breams family (Sparidae) that lives in rocky or sandy bottom waters of continental waters up to depths of 250 meters, being more frequently observed in waters less than 100 meters deep. The species is present in the waters of the Atlantic Ocean, from the British Isles to the coasts of Mauritania, including Madeira and the Canary Islands along the way. On the other coast of the Atlantic Ocean it is also present, from New York to Argentina, although it is absent in Bermuda, Bahamas and the West Indies.

The body of Pagrus pagrus is oval, moderately tall and laterally compressed. It can reach up to 75 cm in length, with the most frequently observed length being 35 cm. The profile of the head is convex, being slightly more pronounced at eye level. Both jaws are equipped with canine teeth in their front parts, 4 in the upper jaw and 6 in the lower jaw. These teeth are followed by smaller teeth that progressively become molars in the posterior third of the jaws. Turning now to the fins, we find that the dorsal fin is unique and continuous, being formed by 11 spines and 9-12 soft rays. Although the first two spines of the dorsal fin are smaller than the following ones, the difference in height is not very extreme. The anal fin is formed by 3 spines and 8-9 soft rays.

As for the coloration of Pagrus pagrus, the base color of the body is pinkish with silver highlights, being lighter on the ventral part, and darker in the region of the head from the nape to the mouth. Sometimes its body has small bluish spots on the dorsal part of the flanks, being much more visible and striking in juveniles. The caudal fin is dark pinkish, with white tips. A distinctive feature compared to other similar species of the same family is that Pagrus pagrus lacks spots at the origin of the pectoral fins and that the first soft rays of the pelvic fins are not filamentous.

Carnivorous feeders, Pagrus pagrus captures its prey, mostly crustaceans, molluscs and small fish. The breeding season for this species is between April and June. 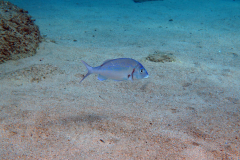 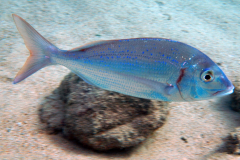 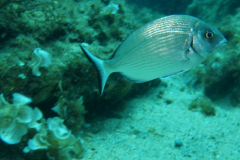