Sarpa salpa is a species belonging to the se breams (Sparidae) that inhabits rocky, sandy bottoms and Posidonia oceanica meadows, up to depths of 70 meters. This species is found throughout the Mediterranean Sea, as well as in the eastern Atlantic Ocean, from the coasts of the Bay of Biscay to the coasts of Sierra Leone, and further north from Congo to South Africa. They are also present in Madeira, Canary Islands and Cape Verde Islands.

The body of Sarpa salpa is oval, elongated and moderately compressed laterally. They reach sizes between 35 and 45 cm maximum total length. Their head is small with a blunt snout and slightly convex profile. The mouth is terminally positioned, small and has thick lips. The jaws are equipped with a single row of incisor teeth. The dorsal fin is unique and has 11-12 spines followed by 14-17 soft rays. The anal fin is formed by 3 spines and 13-15 soft rays. The pectoral fins are short and end in a pointed shape. As for the coloration of Sarpa salpa, the body is bluish-gray with 10-12 thin, orange-golden longitudinal lines. The head region is somewhat darker, and the belly is lighter. The eyes are yellow, with a dark interorbital space. Also prominent on the flanks are the dark and very evident lateral lines, as well as a black spot at the upper base of the incision of the pectoral fins with the body. The caudal fin is dark gray, the rest of the fins being lighter.

Sarpa salpa is a gregarious species that forms large schools of specimens.

The diet is mostly herbivorous, although occasionally complements its diet of algae with small crustaceans. Juveniles, on the other hand, are exclusively carnivorous, feeding exclusively on small benthic invertebrates.

The reproduction of Sarpa salpa occurs during the months of March to April and from September to November. It is a protandric hermaphrodite species, which is very common in sea breams. Initially individuals are born with developed male reproductive organs, and later in their life cycle, these atrophy and the female reproductive organs develop.

In the eastern Mediterranean Sea there is a possibility of confusion with the species Siganus rivulatus, introduced from the Red Sea, which is also observed on shoals among plant growths. It differs, however, by its color: olive green to brownish with golden longitudinal bands, slightly wavy, as in the lower half of the body. It can also be confused with the bogue (Boops boops) which does not have such a high back and is thinner than the salpa. In addition, its longitudinal bands are less numerous and not as marked. 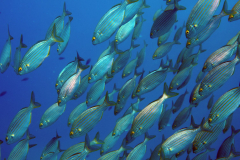 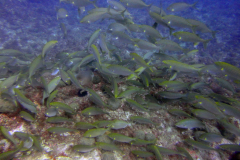 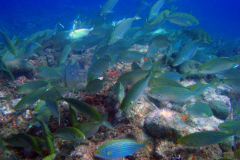