Kyphosus cinerascens is a fish belonging to the class Actinopterygii, the order perciformes and the family Kyphosidae. It is a species found in shallow waters as well as in the tidal channels of the reefs of the Indian and Pacific oceans up to 30 meters deep. It usually lives on rocky bottoms or upholstered by algae.

Kyphosus cinerascens has a dark gray body with a bluish tint that is lighter on the underside of the body. The edge of the scales are dark, giving it the appearance of dark longitudinal lines on its flanks. They also have a completely silvery stripe under the eye, reaching the operculum. The fins are usually dark brown.

It is common to observe this species forming schools of individuals of the same species in surface waters, especially during daylight hours. During the night, they are a more solitary species and usually swim near the seabed. The diet is herbivorous in nature, although occasionally complemented with some benthic invertebrates. 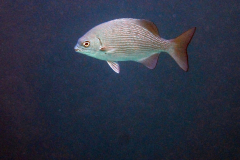 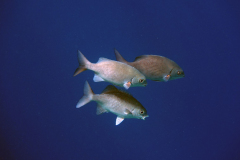