Kyphosus sectatrix is a species belonging to the class Actinopterygii, the order perciformes and the family Kyphosidae, found in the shallow, rocky coastal waters of the Atlantic Ocean. In the American Atlantic we can find this species from the coasts of New England, passing through Bermuda, the Caribbean Sea and reaching the waters of southern Brazil. On the other side of the Atlantic, it is present in the northern part of the African continent.

The body of Kyphosus sectatrix is moderately tall, reaching lengths of up to 67 cm and weighing 3.8 kg. It has a relatively short head, with a pointed profile and a small mouth. The mouth has jaws in which there is a row of robust teeth with blunt tips close together. The dorsal fin is single and has 11 spines followed by 13-15 soft rays, 14 being the most frequent number. The anal fin is formed by 3 spines and 12-13 soft rays. The pectoral fins are short and the caudal fin is slightly emarginate. The body color of Kyphosus sectatrix is a silvery-gray with greenish-tan longitudinal stripes, as well as two horizontal bronze bands on the head. The fins are usually dark in color. There are specimens that have a very different and striking coloration, with the upper half of the body being bright yellow.

Kyphosus sectatrix is a species that can control the coloration pattern of its body, and it is not uncommon to observe specimens in which on its flanks we observe a checkerboard pattern, in which white spots contrast with the black ones. It is common to find it forming schools of specimens with other similar species in the shallow waters of the reefs.

As for the diet of Kyphosus sectatrix, it is a voracious predator of floating algae such as Sargassum, and generally feeds on benthic algae, with a preference for phaeophyte algae. Occasionally it complements its diet with crustaceans or molluscs. 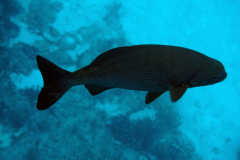 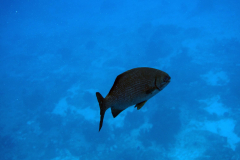 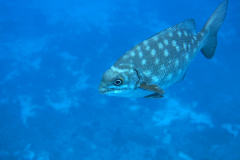 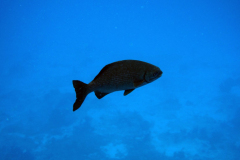 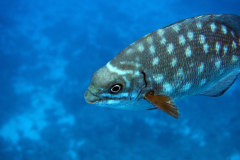 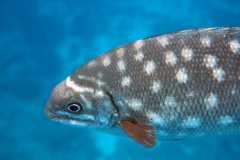 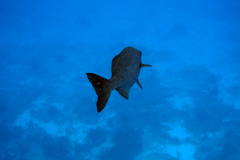 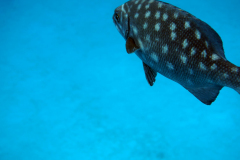 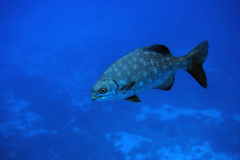