Within the family of snappers (Lutjanidae) we find this species, Lutjanus bengalensis. It is a species that inhabits the tropical waters of the Indian Ocean. We can find this species from the coasts of Sumatra, to the east of Africa, the Red Sea and occasionally in the waters of Indonesia. It has a preference for coral reef habitats at depths of 10 to 25 meters.

Lutjanus bengalensis has a yellowish color in the upper part of the body formed by the horizontal of the upper hatching of the pectoral fin and the lower part of the caudal peduncle. Below this horizontal, the color is whitish. On the flanks it has 4 whitish-bluish colored lines. The first and second line, starting counting from the upper one, are born next to the posterior height of the eye. The third line arises from the upper part of the aperture of the operculum. The starting of the fourth line is very subtle, being its origin in the upper jaw. All four line run horizontally backwards, to the upper margin of the dorsum in the case of the first three, and to the caudal peduncle, but without entering it in the case of the fourth one. The dorsal, anal and caudal fins are completely yellowish, and the pectoral fins are whitish.

It is common to find specimens of this species resting during the day under coral shelves forming small groups of specimens. During the night, is when they are more active, and look for their prey, among which we find small fish and crustaceans. 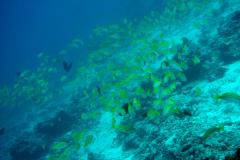