Ocyurus chrysurus is a species belonging to the snappers family (Lutjanidae), which can be found in the Atlantic Ocean, from the coasts of Massachusetts to southeastern Brazil, including the entire Gulf of Mexico and the Caribbean Sea. It inhabits coastal waters at depths of between 1 and 160 meters, although they are usually found at depths of less than 70 meters.

The body of Ocyurus chrysurus has a yellow horizontal stripe that runs from the snout, across the eye, to cover the anteriodorsal part of the caudal peduncle, and the entire posterior part of the caudal peduncle. The yellow color of this horizontal stripe continues, completely staining the entire caudal fin. Dorsally above the yellow stripe, the color of the body is silver, darker as we move more towards the back, and with yellow spots. Below the horizontal yellow stripe, the color of the belly is pinkish to white. The dorsal fin is yellow, and both the anal and pectoral fins are either transparent or have a light pale salmon color.

During the months of January to April, and later from August to October, the two reproductive peaks of Ocyurus chrysurus occur, although they can reproduce throughout the year. The longevity of this species of snapper has been estimated at 17 years. 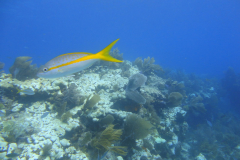