Chaetodipterus faber is a species belonging to the class Actinopterygii, the order Perciformes and the family Ephippidae, found in the waters of the west central Atlantic Ocean, from the coasts of Massachusetts, through the Gulf of Mexico, and the Caribbean, to the waters of northern Brazil. Preferred habitats for this species are coastal and shallow reef waters, mangroves, sandy beaches, bays and wrecks or underwater structures.

It is common to observe large concentrations of specimens of Chaetodipterus faber, with up to 500 adult individuals. Juveniles tend to stay in mangrove areas at all times where they find the perfect refuge from possible predators.

The diet of Chaetodipterus faber consists of a multitude of invertebrate species, both benthic and planktonic. This diet is occasionally supplemented with algae. 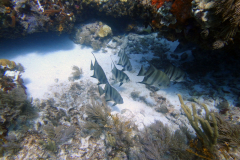