Acanthurus auranticavus is one of the 38 members belonging to the genus Acanthurus, which together with 5 additional genera make up the family of surgeonfishes (Acanthuridae) in which there are currently a total of 73 described species. This species of surgeonfish is found in the waters of the western Indian Ocean and the Pacific Ocean, from Mozambique to the Seychelles, Maldives, Malaysia, Philippines, Indonesia, Australia's Great Barrier Reef and Samoa. They prefer relatively shallow waters, being very rare to find specimens at depths greater than 20 meters.

The body of Acanthurus auranticavus is characteristic of a surgeonfish, that is to say an oval-shaped body and very compressed laterally. They can reach sizes up to 45 cm in total length, although the most common is to observe specimens of 30-35 cm. It has a terminal mouth, relatively small and slightly extensible, and the eyes are located in a relatively high position within the face of the specimen. The dorsal fin is unique and continuous, consisting of 9 spines and 25-26 soft rays. As for the anal fin, it has 3 spines and 23-24 soft rays. In the caudal peduncle we find a scalpel that is facing forward, and that specimens use as a defensive method when they feel in danger.

The base color of the body of Acanthurus auranticavus is dark grayish brown, which acquires an orange hue from the pectoral fins down. It stands out surrounding the area of the peduncular scalpels, a bright orange elliptical spot; as well as a white stripe located just at the base of the caudal fin. The dorsal fin has a thin black stripe that runs along the base of the entire length of the fin, and the color of the fin varies along its length from the same initial color as the rest of the body (dark grayish brown) to a deep dark blue color in the most rear part of the fin. The anal fin, on the other hand, is deep dark blue along its entire length, although it may have an electric blue line on its outermost edge. The pectoral and pelvic fins are the same body color, and have black rays and outer edge. Finally, the caudal fin has a lighter light blue outer margin than the rest of the fin, which is a deep dark blue.

It is common that specimens of Acanthurus auranticavus form large groups that move around the rocky bottoms of reefs and lagoons in search of benthic algae on which they base their diet. 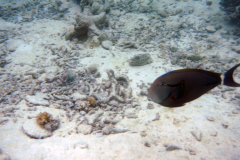 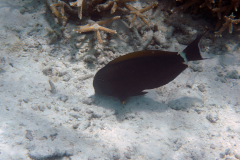 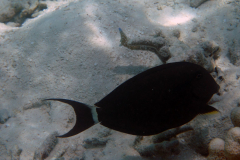 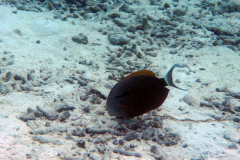 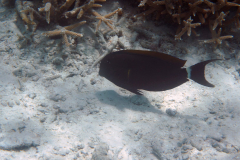 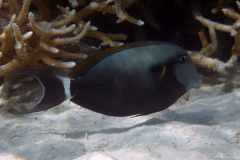 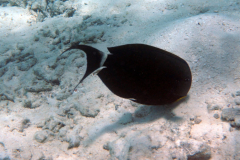 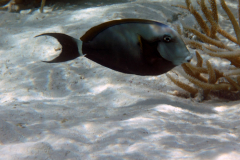 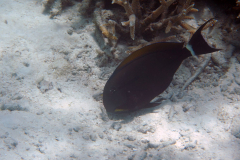