Acanthurus coeruleus is one of the 38 members belonging to the genus Acanthurus, which together with 5 additional genera make up the family of surgeonfishes (Acanthuridae) in which a total of 73 species are currently described. This species is associated with reef areas, rocky and/or with the presence of algae, at depths between 2 and 40 meters, although they are more frequent at depths of more than 20 meters. Its geographic distribution includes the western Atlantic Ocean, from the coasts of Florida, the entire Caribbean Sea, the Bahamas, and the Gulf of Mexico, to the islands of Ascension and southern Brazil.

The maximum total length of Acanthurus coeruleus specimens can reach up to 39 cm, with the most common adult size being 25 cm. The body is laterally compressed and oval in shape. The snout is short and slightly pointed, with a small terminal protractile mouth. The dorsal fin is continuous, with 9 spines and 26-28 soft rays, the anal fin has 3 spines and 24-26 soft rays, the pectoral fins have 16-17 rays. Characteristic of this family of fish, in the caudal peduncle we find a retractable spine on each side, which will be used as a defensive method if it feels attacked. In the case of Acanthurus coeruleus, the spines are protected by a cream-colored cover.

Its coloration is deep blue, sometimes purplish. Mature specimens may temporarily change their coloration, from almost black to pale white, in whole or in parts of the body. Juveniles are luminous yellow, and have another transition stage to the adult in which they acquire a grayish blue or orange-brown hue, with several vertical gray stripes.

The diet of Acanthurus coeruleus is exclusively vegetarian, feeding on a multitude of benthic algae. It is common to find specimens of this species forming large schools in which there may be specimens of different species, such as Acanthurus bahianus, Acanthurus chirurgus and Acanthurus tractus.

Regarding the reproduction of Acanthurus coeruleus, it is a species that does not present sexual dimorphism and reaches sexual maturity with lengths of approximately 13 cm. Reproduction occurs in large schools of thousands of specimens, where females spawn large quantities of eggs, while males release their sperm, so that fertilization occurs externally in the water column. The fertilized eggs will be disseminated by the currents, and after 24 hours the larvae will hatch, and after 45-60 days they become juveniles. 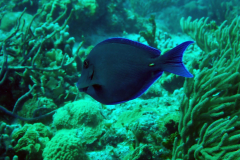 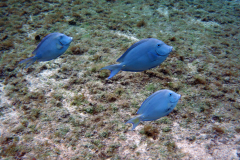 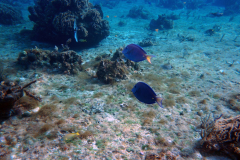 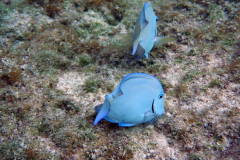 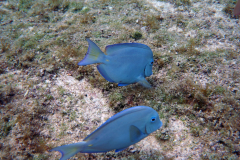 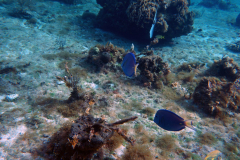 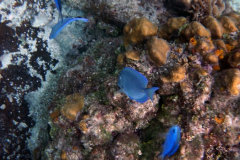 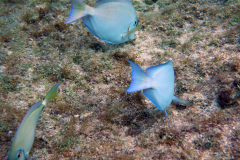 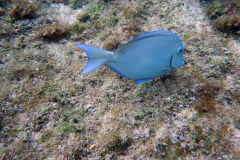 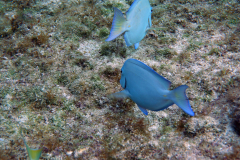 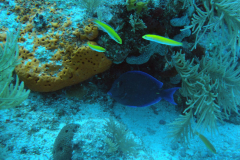