Acanthurus lineatus is one of the 38 members belonging to the genus Acanthurus, which together with 5 additional genera make up the family of surgeonfishes (Acanthuridae) in which a total of 73 species are currently described. It is a species widely distributed in the Indian and Pacific Oceans, present from the coasts of East Africa to French Polynesia and Hawaii, although it is absent in the Red Sea and much of the Arabian Peninsula. It inhabits coastal waters less than 15 meters deep in coral reefs or rocky regions, generally exposed to wave action.

The body of Acanthurus lineatus is relatively elongated, reaching up to 38 cm in total length, laterally compressed and with a small terminal mouth. The dorsal fin is continuous and shows no indentation between the first region of 9 spines and the second of 27-30 soft rays, the anal fin has 3 spines and 25-28 soft rays, and the caudal fin is of a very lunate shape, with the ends of the upper and lower lobes elongated forming thin and long filaments. Characteristic of this family of fish, on the caudal peduncle we find a retractable spine on each side, which will be used as a defensive method if it feels attacked. In the case of the blue banded surgeonfish, these spines are among the longest of the entire family, being hidden in a crevice present in the caudal peduncle, and are connected to venomous glands.

Acanthurus lineatus is a territorial species. The larger male controls well-defined territories that allow him to feed himself and a harem of females. The diet is based on filamentous algae, rhodophytes and occasionally small crustaceans.

There are no apparent differences between male and female specimens of Acanthurus lineatus. Reproduction is by external fertilization, forming large groups of specimens for spawning (although episodes of reproduction in pairs have been documented). The fertilized eggs are spread by the currents, which, thanks to a small drop of oil inside them, are able to float. Twenty-four hours after fertilization, the larvae hatch, the back half of which is completely translucent, and the front half of which is silvery in color. The larvae are known as Acronurus, and are very laterally compressed larvae, with a triangle-shaped head, large eyes and prominent pectoral fins. They have a long larval stage, compared to their related species. When they reach 27 to 32 mm in length, they metamorphose from the larval to the juvenile stage. In doing so, they mutate from their silvery color to the juvenile coloration, in which they have bright red pelvic, caudal, dorsal and anal fins, especially the posterior part of the last two, and their profile shapes become rounded. 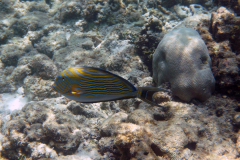 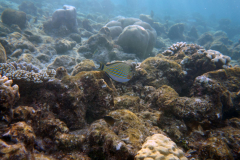 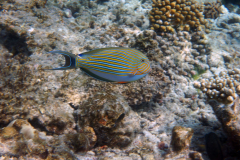 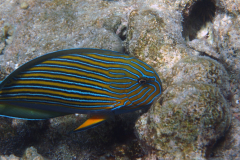 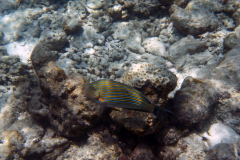