Acanthurus triostegus is one of the 38 members of the genus Acanthurus, which together with 5 additional genera make up the family of surgeonfishes (Acanthuridae) in which a total of 73 species are currently described. Acanthurus triostegus occurs in the tropical Indo-Pacific region. Its range extends from the coast of East Africa and Madagascar to southwestern Japan, Australia and Central America, including many Pacific island groups. It is found on hard bottoms of lagoons, reef slopes, bays and estuaries. Juveniles are common in tide pools, and larger fish are found at depths up to about 90 meters.

The body of Acanthurus triostegus is of the shape characteristic of its family, a laterally compressed body and oval in shape. It is a relatively small species, for the sizes observed within the species of the same family. The most frequent size is 17 cm, although there are records of specimens that have reached up to 24 cm in total length. The snout is relatively large, and has a small protractile mouth located in a slightly lower position inside the head. Inside, there are 12-16 teeth in the upper jaw and 14-18 in the lower jaw. The dorsal fin is continuous, with a first region formed by 9 spines and the second one by 22-24 soft rays, while the anal fin has 3 spines and 19-22 soft rays, the pectoral fins have 14-16 rays, and the caudal fin is truncate to emarginate. Characteristic of this family of fish, on the caudal peduncle there is a retractable spine on each side, which it will use as a defensive method if it feels attacked. In the case of the convict surgeonfish, these spines are relatively small, being hidden in deep crevices present on the caudal peduncle.

The coloration of Acanthurus triostegus is olive gray, with four vertical black stripes on the body, and also one on the head that is slightly slanted and crosses the eye, and finally another stripe on the caudal peduncle (which we will often observe as two points, one on the upper and one on the lower end of the caudal peduncle). These six black bars will allow us to differentiate Acanthurus triostegus from another very similar member of the family, Acanthurus polyzona, which has 9 vertical stripes and which we will find only in the Indian Ocean regions. Continuing with the coloration of Acanthurus triostegus, on the ventral side the body color is white. The dorsal fin and a part of the upper dorsal third of the body are yellow.

It feeds mainly on plankton and filamentous algae, forming large schools of specimens that as a group act territorially. The reproduction of this species occurs at dusk, when large groups of individuals gather to spawn. Fertilization will occur in the water column and the egg will be formed and spread by the currents, thanks to the presence of a small drop of oil that makes them float. After approximately 26 hours, the larvae, called Acronurus, hatch. These larvae are completely translucent in the back half and silver in the front half. The shape of the larvae is very laterally compressed with a triangular shaped head, large eyes and prominent pectoral fins. They will live as larvae for approximately two and a half months before undergoing metamorphosis into juveniles. 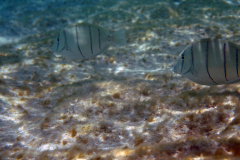 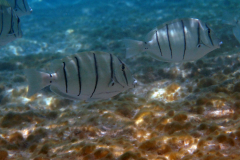 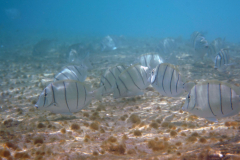 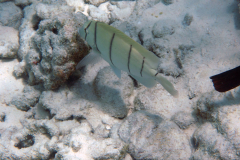 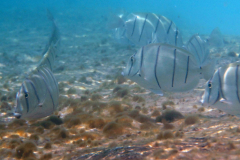 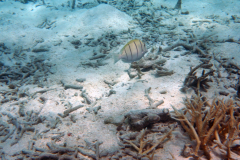