Ctenochaetus striatus is one of the 9 members belonging to the genus Ctenochaetus, which together with 5 additional genera make up the family of surgeonfishes (Acanthuridae) in which a total of 73 species are currently described. It is probably one of the most abundant and ubiquitous of all the species in this family. They inhabit a wide variety of waters, from reef-protected lagoons to offshore reefs. Geographically they can be found in a great extension, both in the Indian Ocean and in the Pacific Ocean. They are only absent in the Gulf of Oman, the Persian Gulf and Hawaii.

The base color of Ctenochaetus striatus adults is dark olive-brown, with a pattern of light, horizontal, mostly parallel stripes covering the body. The head is mottled with orange dots. The pectoral fins are yellowish, the ventral fins are brown, and the caudal fin is brown, with a pale anterior part. Juveniles have a pattern of 8-12 pale stripes.

Ctenochaetus striatus feeds mainly on algae, small invertebrates and detritus. It obtains its food by either sucking or scraping is hard substrate with its teeth.

As for reproduction, Ctenochaetus striatus is a dioecious species, in which males and females gather in large shoals to lay their eggs. The members of the shoal remain practically immobile, until a male changes his body coloration to a pale gray color. Then the male, along with a small group of females, separate from the school and begin to release sperm and eggs to generate larvae. After a few minutes, they return to the shoal and are replaced by another group that begins reproduction. Generally, these large groups of specimens tend to gather at the outermost ends of the reefs, where the marine currents will disperse the larvae more efficiently. 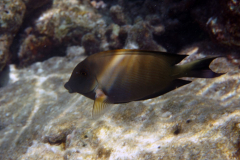