Naso brevirostris is one of the 20 members belonging to the genus Naso, which together with 5 additional genera make up the family of surgeonfishes (Acanthuridae) in which a total of 73 species are currently described. The spotted unicornfish is found in a very wide geographic range that includes the Indian and Pacific Oceans, being extremely frequent in the waters of the Australian Great Barrier Reef. The limits that comprise this wide extension could be set from the east coast of Africa to Hawaii in the west-east direction, while in the north-south direction its distribution would go from southern Japan to Lord Howe Island in Australia. Although their presence is described up to a depth of 120 meters, they are usually found in waters less than 45 meters deep.

Without a doubt, the body of Naso brevirostris is very characteristic and practically unmistakable. It has an oval-shaped and laterally compressed body, like all members of its family and many other fish families. They can reach sizes up to 60 cm in total length. The mouth is small and terminally positioned. Adult specimens develop between the eyes and mouth a distinctive and characteristic horn, which in juveniles is only a slight bulge that will grow as they do. As for the configuration of their fins, we find that the dorsal fin is unique and has 6 spines and 27-29 soft rays, the anal fin has 2 spines and 27-30 soft rays, the pectoral fins have 15-17 rays, the pelvic fins have 1 spine and 3 soft rays and finally the caudal fin is slightly rounded and without filaments at the ends of the same. On each side of the caudal peduncle, this species has 2 modified spines in the form of scalpels.

The base color of Naso brevirostris is olive-brown to gray, usually with the anterior, cheek and throat with a broad band of pale coloration. It is mottled with small dark spots on the head and lower body. The upper part of the body has fine dark vertical bars. Adults have dark diagonal lines on the horn. The lips are blue. The caudal fin is light blue. Juveniles are grayish blue, with three vertical bands of color on the caudal fin, white on the margin, green in the center and black at the base.

Naso brevirostris reaches sexual maturity at a size of 25 cm. The most obvious sexual dimorphism consists of the larger defensive blades of the males. They are dioecious, externally fertilized and pelagic spawners, in pairs. They do not care for their young, and form large spawning aggregations. Larvae develop in a pelagic environment for approximately 90 days, until they become juveniles. 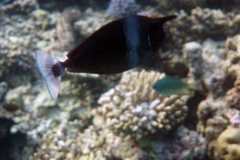 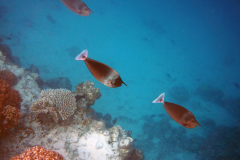 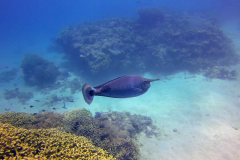 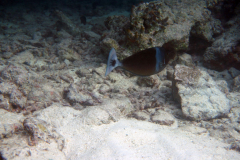 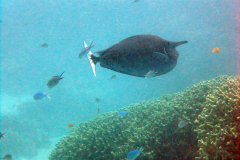 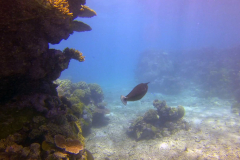 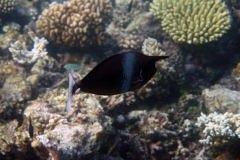