Naso lituratus is one of the 20 members belonging to the genus Naso, which together with 5 additional genera make up the family of surgeonfishes (Acanthuridae) in which a total of 73 species are currently described. The orange-spined unicornfishes are found in the tropical waters of the Indian and Pacific Oceans, from the Red Sea (although absent from the Gulf of Oman and Persian Gulf), south to Indonesia, east to the waters of Hawaii and French Polynesia, and from southern Japan to the southernmost part of Australia's Great Barrier Reef. Although specimens of this species can be found up to 90 meters deep, the most common and usual is that they are not in waters deeper than 30 meters.

The body of Naso lituratus has the characteristic shape of the other surgeonfishes, that is to say an oval-shaped body, very compressed laterally, and despite being called orange-spined unicorn fish, it does not have any horn-shaped appendages. They can reach sizes of up to 45 cm maximum total length, being 35 cm the most common length to observe. The mouth is terminal, of small size and with between 30-40 small rounded incisiform teeth in each jaw. Its dorsal fin is continuous, and is formed by 6 spines of which the first is the most robust and longest of all, followed by between 27 and 30 soft rays. The anal fin has 2 spines and 28-30 soft rays, the pelvic fins have 1 spine and 3 soft rays, and the caudal fin is lunate in shape. In adult males, the ends of the caudal fin have long filaments. We also highlight the caudal peduncle, which is subcylindrical in section and which highlights the presence of two bony plates in the middle part. In adult specimens, these bony plates are connected to two forward-facing scalpels, which are extensible and used for defense.

As for the body coloration of Naso lituratus, it is grayish brown, with a yellow line running from the back of its mouth to the eye; the snout and the front of this line is black. The forehead is light yellow and the lips are orange. Its dorsal fin has a black horizontal line along the underside, and is bordered in white on the outside. It has a blue line on the outer margin and another stripe, also blue, along its base. The anal fin is orange and bordered in light blue. On the caudal peduncle, it has two orange bony plates on each side. Its caudal fin has a thin yellow line along its outer margin. Like all Naso, it has the ability to change its coloration quickly, depending on its mood or environment.

Generally, juvenile Naso lituratus are found in areas of very well-lit waters, along with specimens of other surgeonfish species of similar size. On the contrary, adult specimens tend to be more solitary, although in certain occasions they can form large schools, especially during the reproductive season. The differentiation between males and females of Naso lituratus is relatively simple thanks to the presence or absence respectively of the long filaments of the caudal fin. Specimens reach sexual maturity at approximately 12-14 cm in length. As previously mentioned, on certain occasions numerous adult specimens may aggregate to reproduce, although it is more common for reproduction to be carried out by isolated pairs. Fertilization is external, leaving the fertilized eggs to be disseminated by the dominant currents of the area.

Finally, as for the feeding of Naso lituratus, we find that their diet is based on algae, and among their preferred algae we find some species of the genera Sargassum and Dictyota. 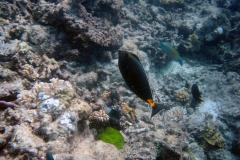