Zebrasoma desjardinii is one of the 7 members belonging to the genus Zebrasoma, which together with 5 additional genera make up the family of surgeonfishes (Acanthuridae) in which a total of 73 species are currently described. This species is associated with coral reefs, protected lagoons and outer reefs where it is present up to 30 meters deep. Although it is not a very abundant species, its geographic range of distribution is extensive. We can find specimens of this species in the waters of the Indian Ocean from the northern Red Sea to South Africa, and from India to the island of Java.

The coloration of Zebrasoma desjardinii can vary from one individual to another and even within the same individual, depending on age. In general, on the body there are alternating light and dark vertical stripes, the first of these over the eye, and other thin yellowish lines, which in the lower part are reduced to dots. There are also numerous white dots on the head. In the center of the caudal peduncle there is a dark colored spine surrounded by a blue area. The caudal and anal fins have a pattern of yellow lines that start horizontal and become vertical at the back.

The diet of Zebrasoma desjardinii is mostly based on plankton, and some filamentous or benthic algae, thus having a mainly herbivorous diet. However, it has been extensively and regularly documented that they can also feed on certain jellyfish (scyphozoans) and some ctenophores.

Regarding reproduction, this is a species whose reproductive cycles are linked to the lunar cycle. Reproduction usually occurs in pairs. 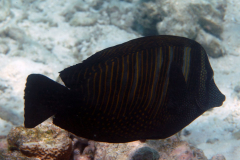 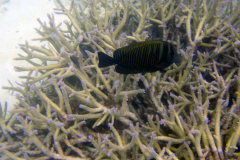 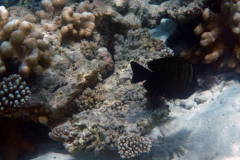 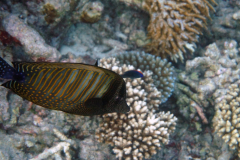