Zebrasoma rostratum is one of the 7 members belonging to the genus Zebrasoma, which together with 5 additional genera make up the family of surgeonfishes (Acanthuridae) in which there are currently a total of 73 described species. It is a species found in the waters of the Pacific Ocean, from southern Japan to the coasts of the Great Barrier Reef of Australia, in the north-south direction, and from Thailand and Malaysia to Fiji and New Caledonia in the east-west direction. It is mostly associated with waters up to 35 meters deep.

The color of the body of Zebrasoma rostratum is completely black or a very intense and dark brown color. It stands out from its black body only the scalpel which is white, and in some specimens there may be a thin white line at the base of the dorsal fin.

The shape of the mouth, as well as its dentition make Zebrasoma rostratum a species that feeds almost exclusively on filamentous, encrusting or even benthic algae, although occasionally it can consume certain small invertebrates.

It is common for this species to live in pairs or even solitary. Male specimens tend to be larger than females. The specific details of the reproduction of this species are largely unknown, although it is presumed that it is similar to that of its genus mates, and therefore will be an external fertilization, with the larvae scattered by the currents and passing a planktonic stage to later become juveniles and descend to the coral bottom, where they are extremely elusive and skittish. 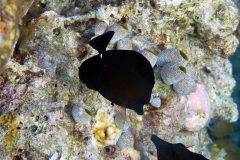