Zebrasoma velifer is a species belonging to the family Acanthuridae. The genus Zebrosoma derives from the Greek 'zebra' in reference to the vertical zebra-like coloration pattern of the species of this genus. The specific epithet velifer derives from the Latin words 'velum' and 'fero', meaning sail-bearer, in allusion to the large dorsal and anal fins. We will find Zebrasoma velifer in the tropical waters of the Indian and Pacific oceans, with a very wide geographical distribution, from the waters of the seas of Japan to New Caledonia in the north-south axis, and from Indonesia to Easter Island in the west-east direction. The habitat in which we will find specimens of Zebrasoma velifer is predominantly coralline with depths of up to 30 meters.

The maximum length of Zebrasoma velifer is about 40 cm. Its body is very compressed laterally, and adopts an almost oval shape. The dorsal fin has 4-5 spines followed by 29-33 soft rays, while the anal fin has 3 spiny rays and 23-26 soft rays. The ventral fins are rather small and the pectoral fins have 23-26 rays. Finally, the caudal fin is truncated and its peduncle has the characteristic very sharp spine of the surgeonfishes, which in this species is present with a blue spot. As for the coloration of the body, as we have previously mentioned, it adopts 6 vertical bands that are relatively wide, being the first of them, the one located on the rostrum and that crosses it at the eye, beeing th line that adopts a darker coloration of all of them and has numerous white dotted spots. The second of the vertical stripes is located at the level of the pectoral fins, and has on its front side yellow-orange spots, while the back of this second stripe has vertical lines of yellow-orange color. The other 4 vertical stripes run along the body up to just before the caudal peduncle, and all have vertical yellow-orange holly stripes on a grayish-bluish background. After the caudal peduncle, the body first adopts a whitish color, then as the caudal fin runs, it adopts a yellow-orange color, ending this fin with a bluish margin. 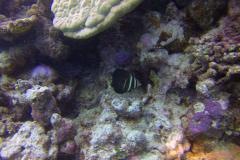