Bodianus axillaris is a fish belonging to the large family of labrids (Labridae). Within the labrids, there are more than 70 different genera and more than 500 species. They usually inhabit relatively shallow waters, although it is possible to observe them sporadically at depths of up to 30 meters. They inhabit coral reefs in both the Indian and Pacific Oceans, being present in Samoa, the Marshal Islands, as far as East Africa, the Maldives and the Red Sea.

The body of Bodianus axillaris can reach a maximum total length of 20 cm. The body is elongated, oval-shaped with a wide and high caudal peduncle. The dorsal profile of the head is straight, with a somewhat pointed snout and prominent jaws in which we highlight the presence of 4 canines in anterior situation of each of the jaws. The first pair of canines is larger than the second. As for the fins of this species, the dorsal fin is unique and continuous, being formed by 12 spines and 10 soft rays. The anal fin has 3 spines and 12 soft rays. The pectoral fins are formed by 15-17 branched rays; and finally the caudal fin has a shape between slightly rounded and doubly emarginate in adult specimens. The lateral line is complete, and has a slight horn.

The juvenile specimens of Bodianus axillaris have a black body, with 9 large white spots along the perimeter of the body. In the adults, the posterior half of the body is white, and the anterior half is reddish-brownish. Both regions are delimited by a diagonal line running from the middle of the abdomen to the soft-rayed portion of the dorsal fin. They also have 3 black spots on each of their flanks, one located behind the operculum, at the base of the pectoral fin; and the other two, located on the dorsal and anal fins. The coloration of the fins is yellow.

Bodianus axillaris is a generally solitary species, which we will observe swimming between the reef and the caves. Their diet is based on benthic invertebrates such as molluscs and crustaceans, and occasionally they have been observed (especially juveniles) removing parasites from larger fish, from whose activity they also obtain food. 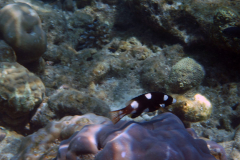 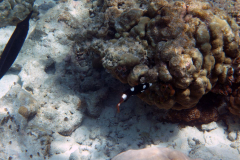