Cheilinus undulatus is a fish belonging to the large family of the wrasses (Labridae). Within the wrasses family, there are more than 70 different genera and more than 500 species. The name of this species comes from the Greek word 'cheilos', which refers to its thick, fleshy lips, and the Latin word 'undulatus', which refers to the veined pattern of its body coloration. The humphead maori wrasse inhabits the coral reefs of the Indian and Pacific Oceans at depths of between 5 and 60 meters. It is found from the coasts of East Africa (from South Africa to the Red Sea), in the Seychelles, Mauritius, Cocos, Maldives and Adaman Islands, in Indonesia, Australia, New Guinea, Micronesia and the Philippines and as far south as Japan.

The body of Cheilinus undulatus is olive green, with large scales behind the pectoral fins, which have dark vertical stripes. The head of adult specimens is blue-green with irregular wavy lines and two black lines extending posteriorly from the eyes. Juveniles are lighter in color.

Despite being a somewhat shy species in front of divers, Cheilinus undulatus will not hesitate to be near anchored boats. It is a species that due to its large size, has been subject to heavy fishing, and is in serious danger of disappearing. It is estimated that there may be one adult specimen of Cheilinus undulatus per square kilometer of reef.

The diet of Cheilinus undulatus is based mainly on fish and hard-shelled benthic invertebrates, such as certain molluscs and crustaceans. 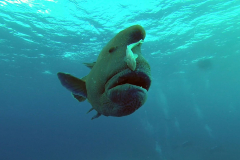 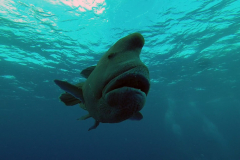 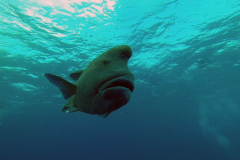 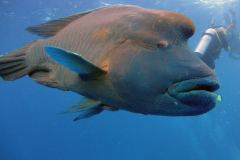 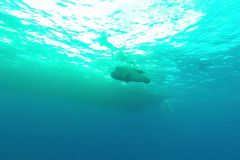 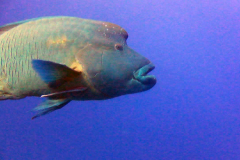 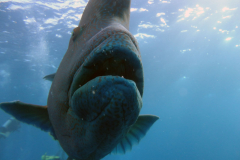 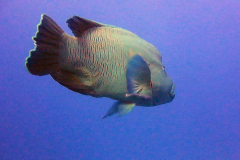