Coris julis is a wrasses (Labridae) very common in shallow rocky bottoms as well as in the vicinity of seagrass beds. We will find this species from shallow waters up to 120 meters deep in the Mediterranean Sea, as well as in the eastern Atlantic Ocean, from the coasts of Sweden to the Canary Islands and Azores.

The body of this species is moderately narrow and elongated (can reach sizes up to 25 cm), with a tapered head and a slightly curved dorsal profile of the head. The dorsal fin is continuous and unique, consisting of 9 spines and 12 soft rays. Coris julis has a marked sexual dimorphism. Females as well as juveniles have an orange-brown back. The lower half and the belly are whitish-yellowish, and in the central part of the flank they have a blackish horizontal stripe. On the contrary, the reproductive males are much more colorful. The back is bluish-gray to greenish-brown and the belly is whitish. They have a black wedge-shaped spot just behind the pectoral fins. They also have an orange zigzag longitudinal band almost always with blue-greenish edges. The first dorsal fin rays are somewhat elongated in males and have an orange, white and black spot. Both reproductive males, females and juveniles have a small blue spot on the posterior edge of the operculum.

It is common to observe specimens of Coris julis removing parasites from other fish species. Another characteristic feature of many wrasses is that during the night they bury themselves in the sand to remain unnoticed by potential predators.

The diet of Coris julis is based on small crustaceans and molluscs.

Regarding reproduction, the individuals of this species are all born as females, and later develop male reproductive organs. In this process, they also change their body coloration to that described above. The reproduction of Coris julis occurs during the months of May to August. During this time, the male will perform a ritual to attract females in the area to his territory. This dance consists of performing upward movements in the water column, fully deploying his fins and circling on himself. When a female is convinced by the male, she will ascend with the male through the water column, releasing eggs and sperm respectively as they approach the surface of the sea. The fertilized eggs will be dispersed by the currents, hatching approximately two days after fertilization. The resulting larvae will spend approximately 1 month as part of the zooplankton and then descend to the bottom as juveniles. 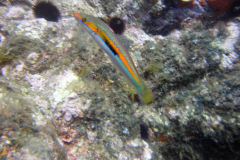 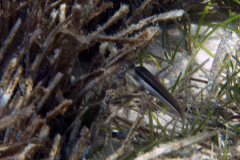 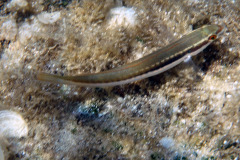