Gomphosus caeruleus is a solitary fish, belonging to the large Labridae family, in which there are more than 70 different genera and more than 500 species. Etymologically the name of the genus of this species is due to the Greek word 'gomphos' whose translation would be 'nail' in reference to the appearance of the snout of the species; and on the other hand the specific epithet derives from the Latin word 'caelum', in reference to the blue color of the males that reminds us of the 'sky'. This species inhabits coral or rocky environments at depths between 1 and 15 meters, both in the Indian Ocean and in the Pacific (from East Africa, India, Indonesia and the Philippines).

The body of Gomphosus caeruleus is moderately long, its total length being between 3.5 and 4 times the height of the body, to reach a maximum total length of 30 cm. The dorsal profile of the head is practically straight. Its two jaws are very elongated and slender, exceeding well in front of the eye height. They have hooked canine teeth in the anterior part of the upper jaw. The dorsal fin is continuous and consists of 8 spines and 13 soft rays, the spines being lower than the soft rays. The anal fin has 3 spines, of which the first is generally very small, followed by 11 soft rays. The pectoral fins are slender, with 2 unbranched and 13 branched rays. The pelvic fins are non-filamentous, and the caudal fin is rounded in juveniles, but truncated with the corners prolonged into filaments in adult males. The lateral line presents an abrupt curvature behind the posterior part of the base of the dorsal fin.

Regarding the coloration of Gomphosus caeruleus, juveniles have a whitish ventral part and a black spot on the edge of each of the scales of the dorsal part of the body, as well as the upper flanks. These black spots on the scales become darker brown as we approach the posterior part of the body. The snout is red, turning red-greenish at the back. The most ventral part of the head is white, presenting a brownish spot that crosses the region of the eyes towards the back. Adults are dark blue-greenish, with a vertical red line on each of the scales. They have an irregularly shaped, yellowish-green bar above the pectoral fins, as well as a semicircular, greenish-blue spot on the back of the caudal fin. The pectoral fins are often black in color.

The feeding of Gomphosus caeruleus is very conditioned by the shape of its snout, being specially adapted to capture small invertebrates between the crevices of corals and rocks. 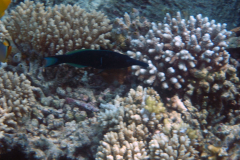 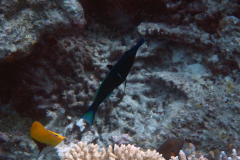 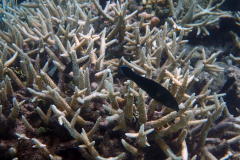