Halichoeres hortulanus is a fish belonging to the large family of Labridae, in which there are more than 70 different genera and more than 500 species. We will find this species mainly among the coral reefs of the Indian and Pacific Oceans at depths between 1 and 20 meters.

The body of Halichoeres hortulanus is relatively elongated, with a maximum total length of 27 cm, which is about 3.4-3.8 times its body height. The dorsal profile of the head is slightly convex, and it has prominent jaws that contrast with the small size of its mouth. The dorsal fin is continuous and has 9 spines and 11 soft rays. The anal fin has 3 spines followed by 11 soft rays. The pectoral fins have 14 rays, and the pelvic fins are filamentous in adult specimens. Finally, the caudal fin is slightly rounded or truncated. The lateral line has an abrupt curve at the end of the base of the dorsal fin.

As for the coloration of Halichoeres hortulanus, it has a body with a pattern of vertical black lines on the edges of the scales, giving the adult specimens and checkerboard pattern, given its whitish background color. It has a yellow spot at the base of the dorsal fin, at the height of the fourth and fifth spines. Often we can also locate a small black spot, circular in shape, which is located at the top of the caudal peduncle. The head is yellowish-green, with a pattern of irregular orange-pink bands. Male specimens have a pattern similar to that described, but with a background color more greenish and not so whitish. Juveniles have 3 irregular vertical black bands, which are separated by a wide white band. They also have a large black spot with yellow edges in the center of the dorsal fin.

As for the diet of Halichoeres hortulanus, it is mostly based on hard-shelled invertebrates, such as molluscs, crustaceans and echinoderms. 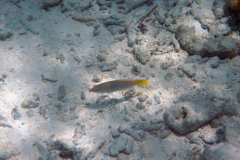 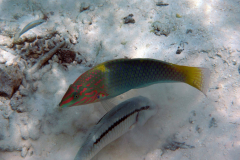 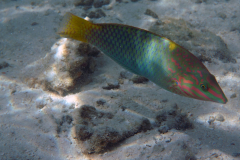