Hemigymnus melapterus is one of the more than 500 species belonging to the more than 70 genera that make up the large family of wrasses (Labridae). This particular species inhabits the coral reefs and reef flats of the Indian and Pacific Oceans at depths of less than 20 meters.

The body of Hemigymnus melapterus is elongated, with a maximum total length of 50 cm. The dorsal profile of the head is slightly convex, and it has prominent jaws although it has a small mouth. Its lips are thick and fleshy, with the lower lip divided in the middle to form two lobes. The dorsal fin of this species is unique and continuous, being formed by 9 spines and 10 soft rays. The anal fin has 3 spines and 11 soft rays. The pectoral fins have 13 rays, and the caudal fin is slightly rounded or even truncated in some specimens. The lateral line is abruptly curved at the back of the base of the dorsal fin.

The way in which Hemigymnus melapterus feeds is based on the ingestion of marine sediment, from which it is able to filter the small invertebrates present, such as crustaceans, polychaetes, molluscs and brittle stars. The sediment, once filtered, is returned to the seabed. 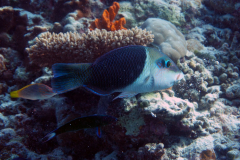 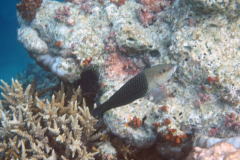 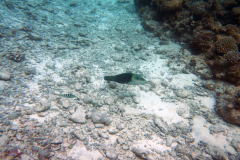