Labrus merula is a species belonging to the family of the wrasses (Labridae) that inhabits the waters up to 50 meters and sandy bottoms or Posidonia oceanica meadows, mainly in the Mediterranean Sea, although it is also present in the eastern Atlantic Ocean, on the coasts of Portugal, Spain and Morocco.

Labrus merula is a solitary and rather shy species, which is most active during the day. In contrast, juveniles tend to be more sociable, and it is not uncommon to find them forming dense schools of specimens. It is common for Labrus merula to build nests with fragments of algae that they collect on the seabed. In these nests is where they spend the night sheltered and protected from possible predators.

The diet of this species is based on small animals that live among the algae, such as polychaetes, molluscs, crustaceans and echinoderms.

The sexual maturity of Labrus merula is reached at about 2 years of age, when they have lengths of about 15-20 cm. During the months of February to May is the reproductive season of the species, when they lay eggs among the rocks or in the seagrass meadows. The clutches are cared for by the males. 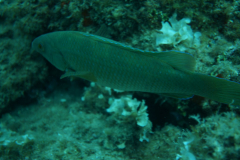