Symphodus cinereus is a species belonging to the family of the wrasses (Labridae) that lives in the waters of the Mediterranean Sea, in rocky bottoms covered by algae, as well as sandy bottoms and even in Posidonia oceanica meadows. The bathymetric range of the species is from surface waters to 35 meters deep.

It is a species whose specimens can reach 16 cm in total length, with an oval, relatively elongated body. The rostrum is relatively short but sharp, with a slightly convex head profile. The mouth, which is protractile, has jaws that are equipped with teeth distributed in a single row. The color of the body of Symphodus cinereus is grayish, brownish or yellowish, with the ventral area lighter in color. It has numerous black spots on its flanks that coincide with its scales, giving it a certain appearance of diamond-shaped spots. The species presents a very marked sexual dimorphism. The coloration pattern explained so far is that of the females. Males in the breeding season have a black or blue spot at the beginning of the dorsal fin and another in the lower half of the base of the tail. Breeding males are also characterized by blue bands on the head.

The diet of Symphodus cinereus is based on benthic invertebrates, such as annelids, molluscs and crustaceans found among the sand and algae.

The breeding season of the species is during the spring months. At this time, the males prepare a hole in the sand that they cover with algae. The male will dissuade the females from entering the nest to lay their eggs, and then the male will take care of the nest. A very common occurrence in labrids is hermaphroditism. The specimens of this species are all born as females, which will reach sexual maturity at approximately one year of life or 4 cm in length. After one year, the females, when they reach a length of approximately 7 cm, undergo a sex transformation to become males. The life expectancy of the species is between 5 and 6 years. 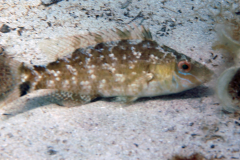 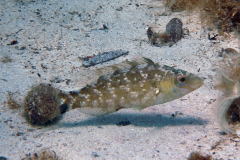 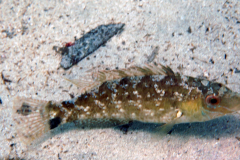