Thalassoma pavo is a species that belongs to the family of wrasses (Labridae) and is found both in the Mediterranean Sea and in the eastern Atlantic Ocean. It is not present in the whole Mediterranean Sea, since in the northern Adriatic Sea and in general in the northern Mediterranean Sea, this species is absent. As for the distribution in the Atlantic Ocean, it is present from the coasts of Portugal to Gabon, as well as in the Azores, Canary and Cape Verde Islands. Generally this species is associated with rocky bottoms or seagrass beds, and at depths between the surface and 150 meters.

The body of Thalassoma pavo is slender, elongated and laterally compressed, which can reach a maximum total length of 25 cm. It has a rounded head with a robber snout and a small terminal mouth. The edge of its operculum is completely smooth. The dorsal fin is unique and consists of 8 spines followed by 12-14 soft rays. The anal fin has 3 spines followed by 10-12 soft rays. Of the caudal fin, we note that the upper and lower rays are longer than the rest, giving the caudal fin a lunate or lacinate shape, a feature much more pronounced in adult males. On the flanks of this species we will find a complete lateral line, from the height of the pelvic fins to the caudal peduncle and presenting an abrupt inflection in the posterior part.

Thalassoma pavo presents a great sexual dimorphism. Males are green-brownish with reddish vertical lines on their flanks. The head is dark red, with a blue reticulated mesh. They also have a visible bluish stripe from the base of the dorsal fin to the belly, just behind the base of the pectoral fins. Occasionally, this bluish stripe is edged with red. The males also have blue, black and dark red spots on the fins, as well as a small dent that we can locate in the area of the forehead of the specimen. On the other hand, females and juvenile males are green-brownish with numerous reddish vertical lines, and have 5 striking vertical bands of blue on the flanks. The head, like the males, is brownish-reddish with a reticulated network of blue lines. The fins of females and juvenile males have longitudinal blue and red stripes.

Male specimens tend to be generally solitary, while females and juveniles can often be observed forming small groups of specimens. This is a very swimming species, which gives the impression of being tireless, as it is constantly moving. At dusk, the specimens bury themselves laterally in the sand, thanks to vigorous movements of their tails. This allows them to spend the night sheltered from possible predators, a fairly widespread behavior within the family of wrasses.

As for reproduction, and as is common in many species of this family, Thalassoma pavo is a hermaphrodite species with sex change. All specimens are born as females, and later in life will develop male reproductive organs, with the female ones atrophying, and will then become males. Unlike other species of wrasses that build nests to lay their eggs, in the case of Thalassoma pavo the eggs are laid in the water column, so that the currents disperse the offspring. It is common during the breeding season to see a male with a harem of several females. 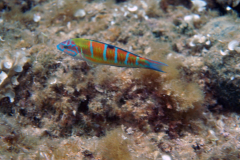