The Moorish idol (Zanclus cornutus) is the only existing species of the zanclidae family. It inhabits the coastal waters of tropical seas, and can be found in the Indian Ocean, South Atlantic, Red Sea and Pacific Ocean.

As we mentioned at the beginning, the body of this species adopts very striking colors. The base coloration is white, with a golden yellow spot in the posterior half of the body. It has 3 vertical black stripes that are bordered on the back by a white stripe. The first of the three black vertical stripes is the widest and starts at the anterior height of the eyes, running past the pectoral fins. The second black stripe is narrower and runs from the posterior half of the dorsal fin to the posterior half of the anal fin. Finally, the third black band runs along the back of the caudal fin. Also striking are narrow white stripes that emerge from the eye area and run up the face, as well as a yellow-orange spot at the base of the snout, which is bordered by a thin black line.

The predominant diet of Zanclus cornutus is based on sponges, occasionally supplemented with small sessile benthic invertebrates such as bryozoans or some ascidians.

It is common to find Zanclus cornutus specimens in small groups of no more than 2 or 3 specimens. 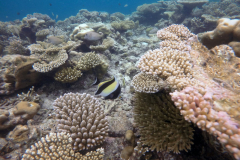 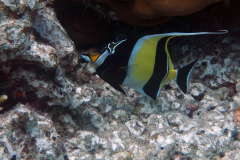 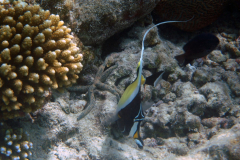 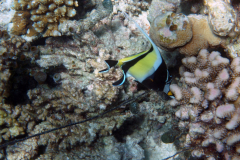 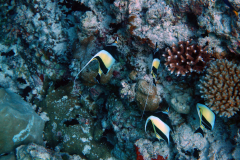 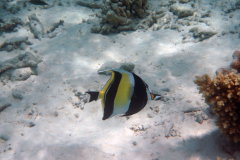 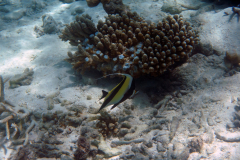 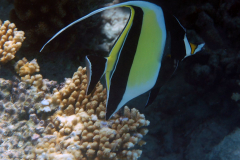