Aulostomus chinensis is a species belonging to the order Syngnathiformes and the family Aulostomidae. It is known as the chinese trumpetfish, and inhabits the shallow, pristine and crystalline waters of the tropical regions of the Indo-Pacific.

It is very common to find specimens of Aulostomus chinensis in a vertical position, with the head facing the sea bottom. Very often we can observe them around gorgonians. With this posture, they manage to pass themselves off as one more branch of the gorgonia that they surround, or at least they go unnoticed among the verticality of the gorgonia itself. They have the capacity to modify their body coloring to be able to pass unnoticed according to the surroundings in which they are. It is also frequently observed in the center of shoals of other fish.

The snout of Aulostomus chinensis together with its slender shape can already give us clues about its feeding. By means of very fast movements they are able to capture their prey among which we find small fish and crustaceans. 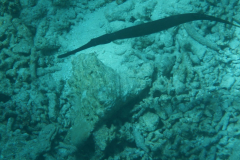 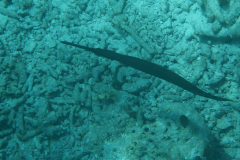 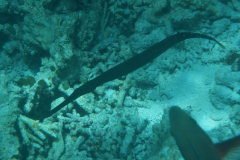 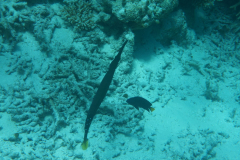 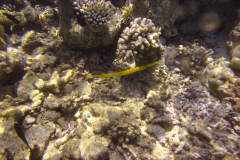