The seahorse is a curious variety of fish with a body shape far removed from those we have associated with fish. The head is inclined towards the trunk, while the tail is long and prehensile, and is used to hold on to the bottom. The Hippocampus guttulatus is characterized by a long snout in comparison with other species of Hippocampus, and for having irregular cutaneous appendages along its body, as well as a dorsal crest, which serve to camouflage itself in the environments in which it lives. There are specimens of diverse colorations, from yellowish, green, brown and even reddish colors. Often we can observe a multitude of small white spots all over its body.

It lives almost always in locations near the coast, and predominantly on seaweed growth or sea grasses throughout the Mediterranean Sea. Its diet consists of small crustaceans and even fish fry. Hippocampus guttulatus usually remains mostly motionless on the substrate, to which they remain attached by their prehensile tail. When it needs to move, it rolls its tail towards the belly, and by means of undulating movements of its dorsal fin, it manages to swim relatively slowly.

As a highlight of this species, as with other species of seahorses, the male is in charge of incubating and protecting the clutches, which he does in a specialized ventral bag. The reproduction of Hippocampus guttulatus takes place during the months of May to July, and pregnant males can be observed until September. The courtship of the seahorses and the transfer of the eggs, approximately 2mm in diameter, from the female to the male's pectoral bag follow a ritual that is specific to the species. The incubation of the eggs by the male is usually about 3 to 5 weeks, after which the male gives birth to young of about 15 mm long and fully developed. 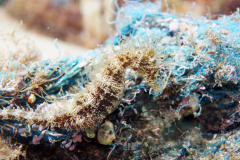