Balistapus undulatus is a species of the family Balistidae which in turn belongs to the order of the Tetraodontiformes. The species is distributed by the waters of the Indo-Pacific, from the east coasts of Africa and the Red Sea to Indonesia, and from the south of Japan to New Caledonia. It is generally associated with the waters of coral reefs with depths of less than 30 meters.

It is an oval-shaped fish, compressed laterally, which can reach a maximum size of 30 cm in length. Its head is large, accounting for approximately one third of the total length of the specimen. In the frontal terminal position we find a small mouth armed with strong teeth slightly outwardly oriented. The eyes of Balistapus undulatus are small, and are located in a position that exceeds the midline of the body of the animal. As for the fins of this species, it has two dorsal fins. The first one is formed by 3 prominent spines, of which the first one is able to be blocked in an upright position thanks to the blockage exercised by the other two spines. The second region, which is born in the middle of the body and runs to the caudal peduncle, is formed by soft rays and has a total of between 24 and 27. Born and running in an identical way to the second dorsal fin but in the ventral end of the body, runs the anal fin which is formed by between 10 and 24 soft rays. The rays of both the second dorsal fin and the anal fin are yellow with the base forming a whitish band. The caudal fin is longer than high and has an orange coloration with the central area somewhat more yellowish. At the base of the tail fin, ie the caudal peduncle, has a large black spot that make pass unnoticed 3 pairs of very sharp spines also black. Finally, the pectoral fins are made up of 14 rays (there are specimens with 13 or 15) and are orange with a dark base. The base color of the body of Balistapus undulatus is between dark green and dark brown, with oblique lines of orange color and curves in the back of the head. A thin oblique band of blue and orange lines runs from near the mouth to below the pectoral fins.

The feeding of Balistapus undulatus is omnivorous in nature. Between the preys of which it feeds have been observed cnidarians, molluscs, ctenoforos, crustaceans, small fish, algae and echinoderms. It is a diurnal species, generally solitary and with a rather territorial behavior that will not hesitate to lunge other fish to keep its territory free of opponents or predators. 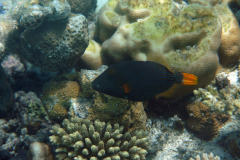 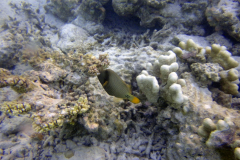