Within the order Tetraodontiformes and the family Balistidae we find the clown triggerfish or Balistoides conspicillum. It inhabits the external areas of the coral reefs, next to the slopes of these, up to depths of 75 meters. The geographical distribution of this species includes the waters of the Indo-Pacific, from the coasts of the east of Africa, happening through Indonesia to Samoa, and from the south of Japan to New Caledonia.

The specimens of Balistoides conspicillum can reach a maximum length of 30 cm. Their body is laterally compressed and has an oval shape. The face is about a third of the body length and it has two medium sized eyes and a small but very robust terminal mouth equipped with strong teeth. The dorsal fin is divided into two regions, a first one that has 3 spines and whose first spine is able to block in an upright position thanks to the blockage exercised by the second and third spines. The second dorsal fin is formed by between 25 and 27 soft rays and is located in the rear third of the body, reaching the caudal peduncle. The anal fin has between 21 and 23 soft rays, and is born a little later than the birth of the second dorsal fin. Both the second dorsal and anal fins have a bluish coloring with a yellow basal band followed by a grayish-white strip. The pectoral fins have between 14 and 15 rays and are bluish, with a yellow line at the base of the fins. The caudal peduncle is laterally compressed and has 3 rows of small spines. Behind it we find the caudal fin which is slightly rounded and black, with a wide vertical band of white color. The base coloration of Balistoides conspicillum's body is black with large circular white spots on the ventral half of the body, along with a yellow mesh on the dorsal side. The region of the mouth, surrounded by a striking yellow stain, is also remarkable. In front of the eyes, it has a white or yellowish strip that crosses the muzzle.

Balistoides conspicillum has a varied diet, based on different benthic organisms, such as sea urchins, crabs and other crustaceans, molluscs and tunicates. They are a solitary species, which is active during the day, and with a marked territorial character, which will not hesitate to make gestures and clashes against other fish that enter their territory. 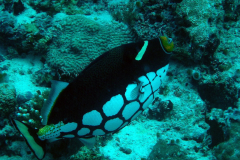 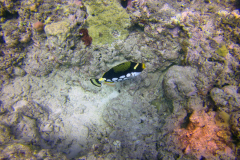 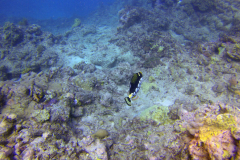 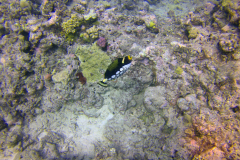 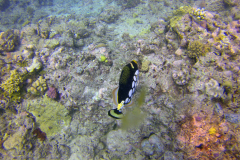 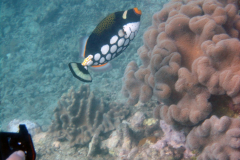 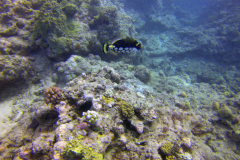 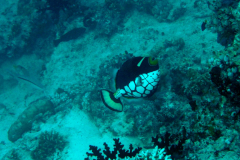 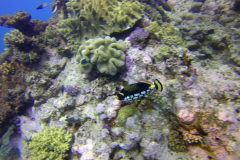 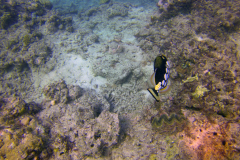 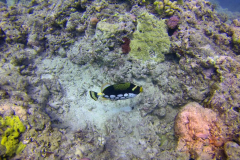 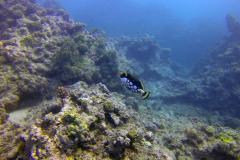 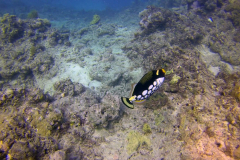 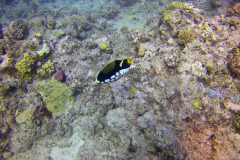