Balistoides viridescens is a species belonging to the order of the Tetraodontiformes and the family Balistidae. They inhabit the waters of the Indo-Pacific coral reefs with depths of up to 50 meters, from the Red Sea to Indonesia and from Japan to New Caledonia.

The oval body of Balistoides viridescens, is laterally compressed, and can reach up to 80 cm in total length. It has a relatively large face in relation to the size of the body and can account for a third of the length. It stands out from the face its mouth, located in terminal position and with strong teeth clearly visible, being the central teeth of each of the jaws longer than the rest. In the face, and previously to the eyes, they have a groove that is directed towards the interior of the body, covering a distance equivalent to the diameter of the eye. The dorsal fin is divided into two regions, the first with 3 robust spines, of which the first can be blocked in an upright position thanks to the action of the other two spines. The second region runs along the third third of the body and has between 25 and 26 soft rays. The anal fin, symmetrical to the second dorsal, has between 22 and 24 soft rays. The pectoral fins have a rounded shape and are formed by between 14 and 15 rays. The caudal peduncle is laterally compressed and there are small spines projected forward. Behind the caudal peduncle, there is the caudal fin, which is black with a thick vertical yellow band. The body color of Balistoides viridescens is between a yellowish gray and brown, with the center of the scales brown or dark green. It has a wide black area with yellow spots that extends from the dorsal part of the head to the base of the pectoral fins, including the eyes. Another wide blackish spot containing pale lines runs from the top of the mouth to the middle of the cheeks. The dorsal, anal and pectoral fins are whitish-yellowish with black edges.

Balistoides viridescens is a fish that can be extremely aggressive, especially females during the breeding season, since they protect with an unusual insistence the laying they have done.

The feeding of Balistoides viridescens is varied and among its preferred prey are sea urchins, crabs and other crustaceans, molluscs and filtering annelids. 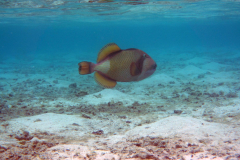 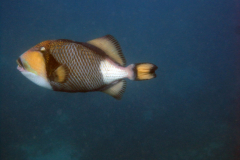 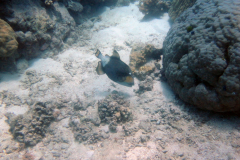 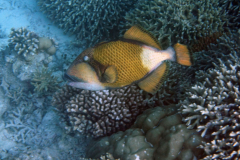 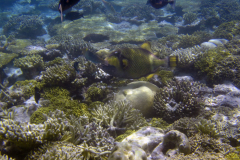 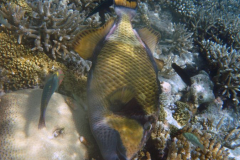 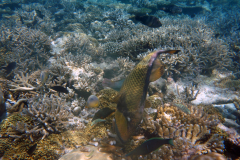 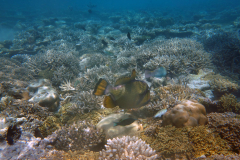 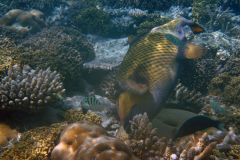 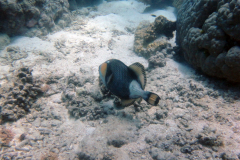 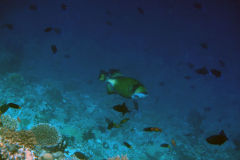 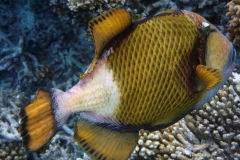