The whitespotted filefish or Cantherhines macrocerus is a fish that belongs to the order of the Tetraodontiformes and to the family Monacanthidae. It is a common species in the crystal clear waters of coral reefs with depths of between 3 and 20 meters. Its geographical distribution includes the western Atlantic Ocean, from the waters of the northern Gulf of Mexico, Florida and Bermuda to the waters of Brazil.

Cantherhines macrocerus can reach lengths of up to 46 cm. Its body is oval in shape, and compressed laterally. It has a face that is a third of its total length and is slightly elongated. At the end of the face we find a small mouth with relatively strong teeth. The dorsal fin is formed by two regions, a first one that has 2 robust spines and that are located in the vertical at the height of the eye. Generally this first dorsal fin is usually found gathered in a dorsal groove. The second dorsal fin, has between 34 and 36 rays and is located in the rear third of the body. The anal fin, symmetrical to the second dorsal fin, has between 29 and 32 rays. The pectoral fins are formed by 14 rays which do not branch. At the base of the tail there are two pairs of robust spines. Behind them we find the caudal fin, with a terminal shape between straight and slightly rounded. Its skin, as its common name indicates, is of an extremely rough texture. The coloration of Cantherhines macrocerus is variable between specimens. Brown and orange are the base colors of its body. Frequently we will see circular white spots on the head and the rest of the body. At the base of the tail fin, they have two white spots, one on each of the lower and rear ends. They have the ability to quickly change their appearance, with patterns of very high contrast with very dark areas and very light spots.

As for the behavior of Cantherhines macrocerus, we can usually observe this species forming pairs. Its diet is omnivorous, but sponges, hydrozoans, corals, gorgonians and some algae stand out. 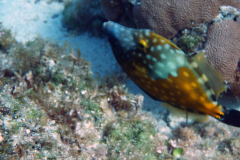 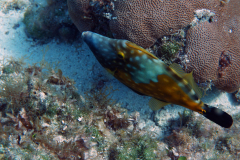