The Spotted trunkfish or Lactophrys bicaudalis is a fish of the order Tetraodontiformes and of the family Ostraciidae. This family of fishes is also known under the name of boxfishes in allusion to its fortified and more or less squared body. Lactophrys bicaudalis inhabits the waters less than 30 meters deep of the western Atlantic Ocean, from Florida to Brazil, including Bermuda, the Gulf of Mexico and the entire Caribbean Sea.

The body of Lactophrys bicaudalis is fortified by bony plates, with a vertical triangular section. The eyes emerge from the fortified body, behind which the body continues without any postocular concavity or spines near the eye region. The mouth is terminal, small in size and robust in appearance. The ventral part of the body adopts a completely flat and wide form in which we emphasize two robust spines located to each one of the sides, that stand out slightly and are located before the height of the anal fin. The body color of Lactophrys bicaudalis is between pale gray and whitish, with numerous dark brown or blackish spots. In adult specimens we will observe behind their eyes three circular white spots distributed in a diagonal position instead of the dark spots we would expect to observe. The mouth region is whitish in color and has no spots.

The fortified body structure of Lactophrys bicaudalis makes its movements relatively slow. Like many of its family members, this species is capable of secreting toxic substances through its skin. Generally these substances are not dangerous to the swimmer/diver in case of contact, however, in case of ingestion they can be lethal, as has been reported in cases of nurse sharks.

The diet of Lactophrys bicaudalis is very varied, finding among its prey a multitude of benthic invertebrates such as molluscs, crustaceans, starfishes, sea urchins, sea cucumbers and tunicates. Occasionally it can also feed on certain algae. 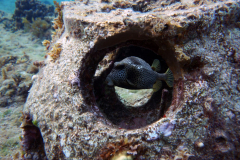 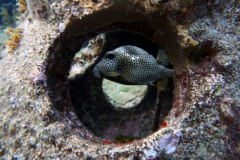 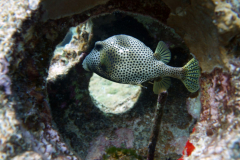