Melichthys indicus is a fish of the Tetraodontiformes order classified within the Actinopterygii class, the Tetraodontiformes order and the Balistidae family. Its geographical distribution includes the waters from the coasts of the Red Sea, to East Africa, and from Thailand to Hawaii. Specimens of this species are found mainly in coral reef waters, usually at depths between 3 and 30 meters, although specimens have been recorded at depths of up to 300 meters.

The body of Melichthys indicus can reach 25 cm in length. It is very dark brown in color. Its coloration is so dark that it is often perceived as black depending on the luminosity of the water. Its fins are also very dark in color, with white lines at the base of the dorsal and anal fins that contrast sharply with the coloration of its body. The caudal fin also has a white line, although this time the white line is located in the terminal part of the fin and not at its base. The body shape is laterally compressed and oval in shape, with a head that is proportionally large with respect to the body. They have a terminal mouth.

They generally feed on hard-shelled molluscs and echinoderms, although sometimes they can also feed on algae or zooplankton.

Melichthys indicus specimens reach sexual maturity when they reach sizes between 11 and 12 cm in length. During the breeding season, whose peaks occur during the months of September to December, and then from April to May, special care should be taken not to pass near the conical nests formed by the specimens on the sandy bottom. It will defend at all costs the territory of its nest, even becoming extremely aggressive with people who may be swimming above it. 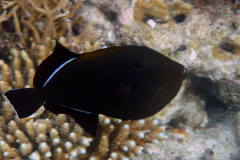 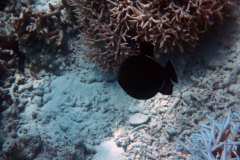 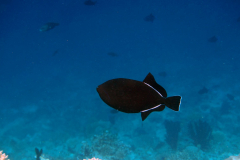 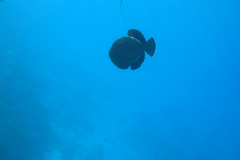