Ostracion meleagris belongs to the family Ostraciidae which in turn belong to the order Tetraodontiformes. They inhabit the seas of tropical climates, where they are generally found associated with coral formations up to 30 meters deep. Their geographic distribution is wide and includes both the Atlantic and Indo-Pacific oceans, and they can be found from East Africa to Mexico, southern Japan, Hawaii, New Caledonia and Tuamotu.

The body of Ostracion meleagris can reach a total length of 25 cm, although the most common specimens do not exceed 20 cm. Under their mucous skin, they have hexagonal plate-shaped scales, which fuse together to form a solid, triangular, box-shaped carapace. The carapace of Ostracion meleagris has only orifices through which the mouth, eyes, fins and anus protrude. They lack a gill cover (operculum), but the gill opening is simply a small slit or hole that is located in front of the pectoral fins. The morphology of its body conditions the movement of this species. It is a slow moving fish, which obtains its impulse through undulating movements of the pectoral and caudal fins, while the dorsal and anal fins are used as rudders that allow them to perform slow but precise maneuvers.

Juveniles as well as females of Ostracion meleagris are dark brown/blackish in color, with lots of white spots all over their bodies. Males, despite having a similar livery on the back, differ in their flanks where they adopt a very different livery to females and juveniles. Their flanks and caudal fin have an electric blue base coloration, in which numerous yellow/orange dots bordered with black stand out against the background. From its yellow eyes, a yellow/golden band runs along its entire body, which forms a border between the dorsal and flank livery. Generally, and in addition to this differentiated livery of the males, they are usually slightly larger in size than the females.

A particularity of Ostracion meleagris is that if they feel stressed they are able to release an extremely potent neurotoxin through the mucus present in their skin. This toxin is known as ostracytoxin, and is lethal to other fish, disintegrating the blood cells of those who ingest it.

Adult Ostracion meleagris are generally solitary and territorial individuals that predominate in the outer parts of reefs. Juvenile specimens, on the other hand, are usually found preferentially inside the reefs.

As for the diet of this species, it is an omnivorous fish. tunicates, polychaetes, molluscs, crustaceans, algae, corals and small fish are part of their diet. They are capable of stirring up the bottom by emitting powerful jets of water, with which they dig up their prey.

Ostracion meleagris is a protogynous hermaphrodite species, that is to say all individuals are born as females, and later in their life cycle, they have the ability to transform into males. During the breeding season, harems of one male and several females are usually formed. At the time of laying, the males usually emit very low frequency sounds that induce the females in their harem to lay. After laying, the eggs are carried away by currents. 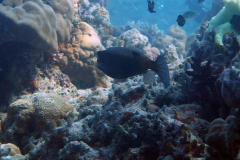