This species, Oxymonacanthus longirostris belongs to the order Tetraodontiformes, within which it is placed in the family of the filefishes (Monacanthidae). The name of the genus to which this species belongs (Oxymonacanthus) derives from three Greek words, on the one hand 'oxys' which means pointed, on the other hand 'monos' which means unique, and finally 'akantha' which means spine. That is, their name refers to the large defensive erectile spine on their back.

They inhabit the calm waters of the inner reefs of tropical seas with depths ranging from 4 to 30 meters. Its distribution is wide throughout the Indo-Pacific Ocean, found from the coasts of East Africa to Mozambique, Samoa and the Ryukyu Islands, the southern Great Barrier Reef, New Caledonia and Tonga.

The striking body of Oxymonacanthus longirostris does not go unnoticed. Its contrasting colored pound has a turquoise blue background with yellow/orange spots forming 8 longitudinal lines, as well as a black spot in the center of the caudal fin. They can reach a length of approximately 12 cm. They have an elongated, terminal mouth that is small, non-protractile and has robust, small teeth (the central ones are the largest). Their striking orange eyes alternate between orange and six whitish radial bands. The body is strongly compressed laterally, adopting a somewhat oval or even rhomboidal shape. They have two dorsal fins, a first one formed by 2 spines and which they generally keep folded in a horizontal position, although they are able to lock in an upright position by means of the lock made by the second spine (this second spine is very small and goes unnoticed). This allows Oxymonacanthus longirostris to cling very tightly in shelters when predators try to pull them out of the hollows to prey on them. The second dorsal fin has between 31 and 35 simple and soft rays, and is considerably separated from the first dorsal fin. The anal fin has 29 to 32 soft rays. The caudal fin is formed by 12 rays that branch along its length adopting a truncated shape. The pectoral fins have 12 to 13 rays. The ventral fins are evolutionarily atrophied, and are small in size, having fused together to form an orange-colored spine that is bordered by a black spot with white dots.

While it is true that in the juvenile stage of Oxymonacanthus longirostris we can find them forming small groups of individuals, adult specimens are not usually very sociable, and we will generally find them forming a pair.

The feeding of Oxymonacanthus longirostris is conditioned by the morphology of its mouth. It feeds exclusively on coral polyps of the genus Acropora. A curious fact, and unique among vertebrate species, is that they capture the smell of the Acropora, and are able to use this smell to hide from their predators (mainly groupers). 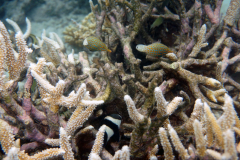