Rhinecanthus aculeatus, also known as picasso triggerfish, is a fish belonging to the family Balistidae in the order Tetraodontiformes. It is a common species of the subtidal regions of reefs and shallow sheltered lagoons up to 10 meters. It is distributed throughout the waters of the Indian and Pacific Oceans, from eastern Africa to Indonesia, and from southern Japan to the Queensland coast of Australia.

The maximum size that specimens of Rhinecanthus aculeatus can reach is 25 cm in length. The body has an oval shape, except when it is trying to intimidate, when it extends the ventral area adopting a trapezoid shape. It has an elongated snout, at the end of which we find a small but robust mouth with prominent lips. The mouth is equipped with sharp teeth. The dorsal fin is divided into two regions. The first, formed by 3 spines (the first one longer, stronger and sharper than the others), can be locked in a vertical position as a defense mechanism. The second dorsal fin has between 23 and 26 soft rays and is located in the posterior third of the body. Symmetrically, but in the ventral part, we find the anal fin, formed by between 21 and 23 soft rays. The pectoral fins are made up of 13 to 16 rays and are located almost in the center of the specimen's body.

The base color of the body of Rhinecanthus aculeatus is creamy white on the upper part of the body and white on the lower part. It has a very striking livery, formed by a dark gray spot in the center of the body, an orange stripe that goes from the snout to below the pectoral fins, and another wider orange stripe that starts at the beginning of the second dorsal fin and goes towards the central grayish spot. From the posterior half of the body, 4 white lines emerge from the central grayish spot and run obliquely to the anal fin of the specimen. Between the pectoral fins and the eye area, we observe three turquoise vertical lines on an orange stripe that is internal to these lines. The posterior third of the body gradually adopts a greenish tone, in which stand out on the caudal peduncle three black lines formed by sharp spines.

Rhinecanthus aculeatus is a very territorial species, especially during the egg-laying season, when they will not hesitate to vigorously protect their territories against any intruder, including bathers and divers. Egg laying usually occurs during the first hours of the day, when the female together with the male lay gelatinous eggs that they attach to the sand, pieces of coral or algae on the seabed. The eggs will be protected by the female for a period of 12 to 14 hours, after which the eggs hatch. Egg hatching usually occurs during sunset. 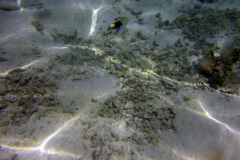 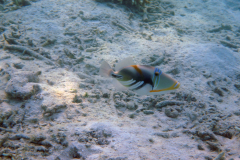 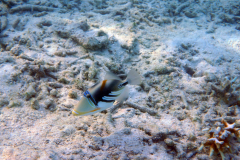 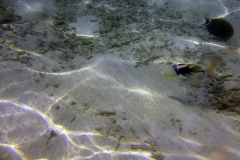 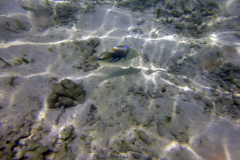 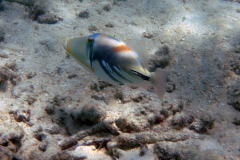 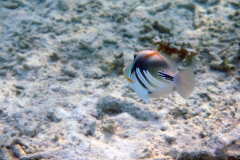 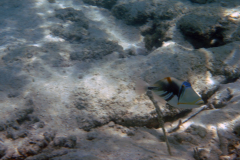 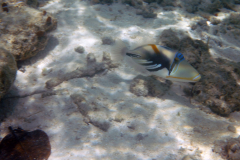 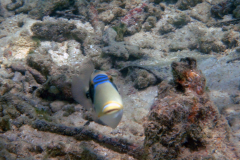 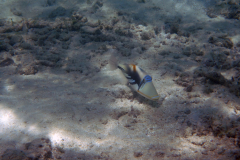 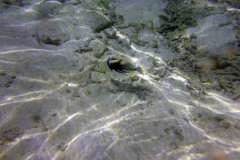 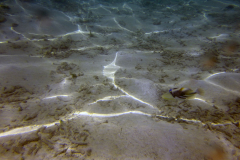 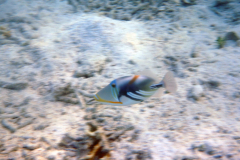 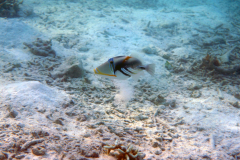 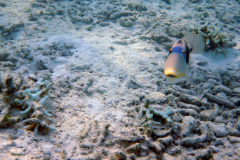