Holocentrus rufus is a species belonging to the class Actinopteri, order Holocentriformes, family Holocentridae and genus Hologentrus. This species inhabits the waters of the western Atlantic Ocean from the coasts of North Carolina to Brazil, including the entire Caribbean Sea and the Gulf of Mexico. It is a species that lives in shallow (up to 30 meters) and shallow waters associated with coral reefs.

The body color of Holocentrus rufus is brick red on the top of the head and eyes. Contrasting with this reddish color is the whitish color of the cheeks and opercular region. The lateral line is complete and runs from the top of the operculum to the base of the caudal fin. Above the lateral line, Holocentrus rufus specimens have several more or less diffuse reddish horizontal stripes with lighter colored spaces in between. Below the lateral line, the stripes adopt a lighter coloration, the color being pinkish. The spines of the dorsal fin are red with a white spot on the distal part. The soft rays of the dorsal, anal, caudal and pelvic fins are pink.

As for the feeding habits of Holocentrus rufus, we can say that it is a species that captures its prey during the night, when it moves away from the reef to look for food in the sand flats near the reef. Among its preferred prey are crustaceans, gastropods and starfishes. During the day it remains hidden in crevices and crevices of the reef. 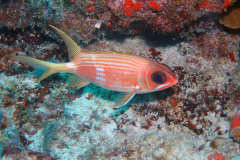