Myripristis kuntee is a species belonging to the family Holocentridae within the order Beryciformes. They inhabit the crystalline waters of the coral reefs, where we will generally find them in the surface waters. As a species, its distribution is wide, covering most of the Indian and Pacific Oceans, with the exception of the Red Sea and the waters of the Persian Gulf.

We can frequently find Myripristis kuntee forming banks of individuals, usually at the entrance of caves and/or cracks, as well as inside them. By size and characteristics, it is possible to confuse this species with Myripristis pralinia, although in these last ones the spot of the operculum extends only slightly below the opercular spine, and does not arrive at any moment at the base of the pectoral fin. 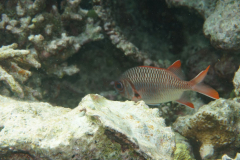