Sargocentron spiniferum or also known in some regions as gigant squirrefish, is a species belonging to the family of holocentrids (Holocentridae). This species is distributed through the waters of the Indo-Pacific coral reefs, from the Red Sea to Hawaii, and from Oceania to the northern coast of Australia.

Its body, compressed laterally, is red, being the most intense shade in the dorsal part and paler in the ventral part. The red color is accompanied by white marks, since the edges of the scales of Sargocentron spiniferum are of whitish-silver color. One of the most distinctive features of this species, is the large spine they have in the preoperculum. This spine is straight and has a length somewhat greater than the equivalent of the diameter of their eyes. If we focus on the region of the head, the dorsal profile of this is straight, and its lower jaw protrudes from the upper when the specimen has its mouth closed. It also has two nostrils that lack protective spines. The second very distinctive feature of this species, is an elongated vertical spot of an intense red color, which they have just behind the eyes, in the operculum of the specimen.

The structure of the fins of Sargocentron spiniferum, as in many fish, is very useful for identification, although this information is difficult to take advantage of during sightings or when identifying photographs of specimens. The dorsal fin is formed by two regions, a first region of intense red color, formed by 11 rigid spines, of which the last ones are of short height, and that between them are joined by a membrane that presents/displays slight incisions between the spines. The second region of the dorsal fin, is formed by 14 to 16 soft rays and its color is yellowish. The anal fin, also yellowish in color, is formed by 4 spines followed by 10 soft rays, although in some specimens it may be 9 rays. The pectoral fins, of an intense red color, are generally formed by 15 rays, and there can be 14 or 16 in certain specimens.

Sargocentron spiniferum is a species that can reach a maximum size of 45 cm, although it is normal to observe individuals of maximum 35 cm. It has solitary habits, during the day it usually remains hidden in cracks and coral projections, and during the night it comes out of them to capture food. The food consists mainly of crustaceans, although occasionally it can feed on small fish. 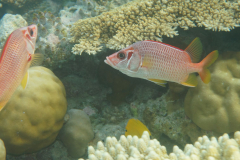 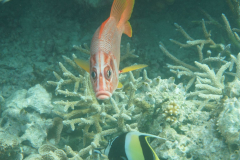 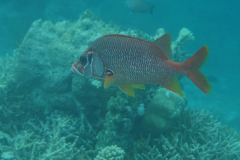 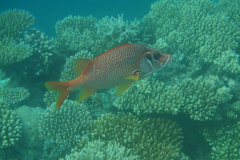 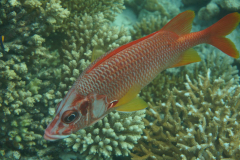