Chlorurus strongylocephalus is one of the 18 members of the genus Chlorurus, which together with 9 additional genera make up the parrotfishes family (Scaridae) in which a total of 99 species are currently described. The waters of the Indian Ocean, and more particularly the coral reef regions, are the usual habitat of this species. Its geographic range extends from the Gulf of Aden, to the east coast of Africa, and as far west as Indonesia.

The body of Chlorurus strongylocephalus is oval, elongated and laterally compressed. They can reach maximum total lengths of up to 67 cm and up to 4 kg in weight, although specimens of 30-45 cm in length are usually the norm. Their face is relatively large, with a very concave dorsal profile and small eyes. The mouth is equipped with strong and robust teeth that are fused together to form a robust and powerful. The operculum is angular at the top. The caudal fin is lunate in shape, with long, thin upper and lower lobes.

Male specimens of Chlorurus strongylocephalus are greenish or blue-greenish in color with a pink-lilac stripe on each body scale, as well as a large yellow spot on the cheek. Females are yellowish-green or grayish-green on top and pinkish-brown underneath, with a dark green spot around the mouth and bluish-green caudal fin margins.

It resembles the species Chlorurus microrhinos, which is present in the Pacific Ocean. The difference is that Chlorurus strongylocephalus does not have a greenish blue line on the ventral margin of the chin, from the mouth to the edge of the operculum.

Chlorurus strongylocephalus together with the species Chlorurus microrhinos and Chlorurus gibbus, are very similar to each other, and form what is known as a species complex, that is to say a group of closely related species, where the line of differentiation between them is often blurred given their recent formation evolutionarily speaking. 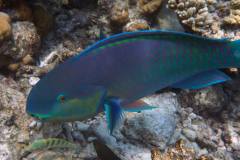 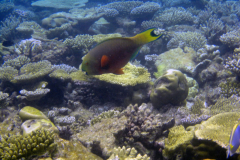