Siganus puelloides is one of the 29 species of fish that make up the rabbitfishes family (Siganidae). We find this species in the waters of the Indian Ocean, especially in the Andaman Sea, the Maldives and the Similan Islands. This fish is associated with coral reefs, where we will observe it at depths no deeper than 20-30 meters.

As for the coloration of Siganus puelloides, the predominant color of the body is brownish yellow, darker dorsally and pale ventrally. It presents some small scattered and diffuse brown spots on the sides. These spots are characteristic of this species, and are the feature that differentiates Siganus puelloides from its close relative Siganus puellus. Another feature of Siganus puelloides is the presence of a blackish colored patch in the eye area, as well as a black arc next to the aperture of the operculum.

The diet of Siganus puelloides is moderately varied, and consists of different benthic organisms, such as tunicates, sponges and even algae.

It is common to observe adult specimens of this species forming pairs, since once they reach sexual maturity, they look for a partner with whom they will maintain close contact. 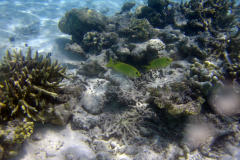 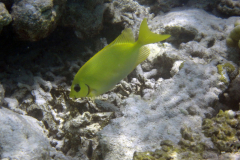