Plectropomus laevis is one of the 7 members of the genus Plectropomus, which together with 75 additional genera make up the sea basses family (Serranidae) in which a total of 538 species are currently described. This species is distributed throughout the tropical waters of the Indian and Pacific Oceans, from East Africa to French Polynesia, Pircair Islands, southern Japan and Australia. It inhabits lagoons with large coral masses or sea meadows down to depths of 100 meters.

The body of Plectropomus laevis is elongated and robust, reaching up to 125 cm and weighing up to 18 kg. It has a large rostrum with a robust mouth in which we find several canine teeth of relatively large size. The preoperculum is rounded and the operculum has 3 large spines, the upper and lower ones covered by skin. The dorsal fin has 7-8 robust spines, followed by 10-12 soft rays. Of the dorsal fin spines, the third or fourth is the longest and most robust of all. The anal fin has 3 spines (the first two are embedded and therefore difficult to observe) and 8 soft rays. The pectoral fins have 16 to 18 rays, and the caudal fin is emarginate in shape.

There are two forms of coloration in Plectropomus laevis specimens. One is whitish or pale yellowish with 5 irregular dark brown to black, saddle or wedge-shaped bars or spots on the dorsal part of the head and body. The first of these is just behind the eyes, the second on the nape of the neck, and the third to fifth are located below the dorsal fin. Small dark-edged blue spots may be visible on the body (mainly on the back). The fins, caudal peduncle, snout and jaws are yellow. There is also a black spot in the center of the base of the pelvic and pectoral fins. The second possible coloration in specimens of Plectropomus laevis is the dark form, whose color is brown, olive, red or almost black, the dark bars (as in the pale form) are usually faint or absent. It has numerous blue, round, dark-edged spots (about half the diameter of the pupil) on the head and body (except ventrally). The dorsal, caudal, soft anal fins, and the base of the pectoral fins are dark brown distally, with the rays darker than the membranes, and the posterior edge white.

Juveniles impersonate the Valentini pufferfish (Canthigaster valentini), swimming only with their pectoral fins, and keeping the caudal fin retracted and the first spines of the spiny part of the dosal fin erect. It is a protogynous monandrous hermaphrodite species, that is, all individuals are born as females and then after about 9 years, they become males. This species is relatively fast growing and can reach a length of 50 centimeters in less than four years and females can be sexually mature in less than three years. They form small spawning aggregations, although large aggregations have been recorded in the northern Great Barrier Reef. It is likely that this species spawns in deeper water on reef fronts compared to Plectropomus leopardus and this may be the reason for the lack of spawning observations of Plectropomus laevis. Adults feed on a variety of larger reef fishes, including other groupers, while juveniles feed on smaller fishes and invertebrates such as crustaceans and squid. 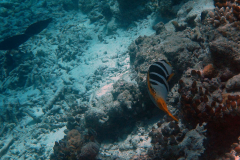 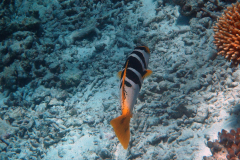 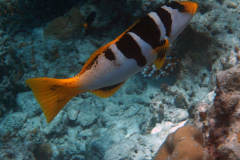 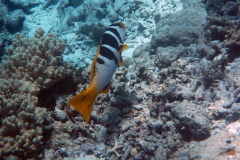 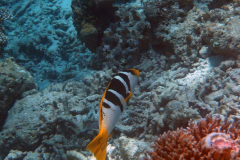 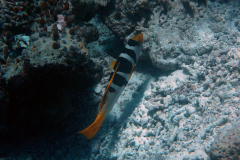 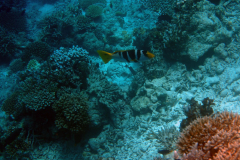 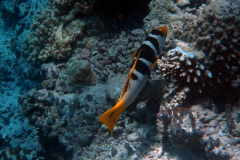 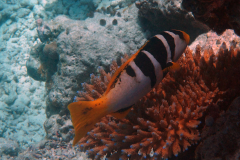